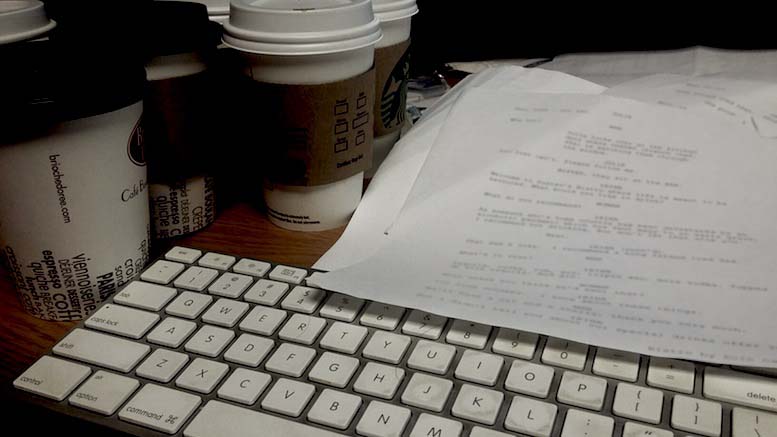 (Imperial, PA) Local screenwriter Sean Tierney knows how to write a screenplay and is excited to have finally finished his first feature-length script after working on it for the past six years. He initially thought his magnum opus was finished two years ago, so he mailed a copy to DreamWorks Studios (Attn: Steven Spielberg or David Geffen if Steven’s out on location) but he received no response.

“I guess it wasn’t quite there yet.”

He eagerly went back to work refining his 173 page script by adding another 68 pages including an extended prologue to give more backstory to his seven major characters. Once it was done he took it to a local writers group who had offered him a table reading and discussion. Unfortunately they ‘totally botched it’ by not reading his dialog with the exact intonation he heard in his head when he wrote it.

“I can’t wait until I’m dealing with proper professionals like Jennifer Lawrence and Benedict Cumberbatch instead of these incompetents.”

Some members of the group were surprised because they didn’t expect a spec script to include so many detailed descriptions of camera movements, and they were confused by the many embedded images. Sean tiresomely explained to the clueless assembled would-be poets and novelists that these were absolutely necessary so that the color grader would know what to do in post to get the mood right.

“They also asked dumb questions like ‘Who is the protagonist?’ – as if a complex work like mine can be broken down using such pedestrian analysis. They obviously don’t know how to write a screenplay like I do.”

He didn’t get any more feedback from the group because he spent the rest of the meeting explaining all the things they had missed because they obviously weren’t paying enough attention. As he was leaving, one of the group – who used to live in LA and made a good living writing for popular TV shows in the 1980s – advised Sean against sending out his manuscript bound with a rusty foldover clip instead of the 3-hole 2-brad method that is used by every screenwriter who ever got a movie made or optioned. He also encouraged him to use standard industry formatting to avoid it being tossed aside by overburdened readers. Sean quickly made an excuse so he could get away from the interfering needy old has-been.

“Do you think Tarantino got where he is today by worrying about petty details like margins and binding? Get a grip!”

Sean describes his script as Action/Drama/Bromance/Slice-of-life/Parlour-piece and ‘like one of those foreign films that comes out of nowhere and blows you away but also not foreign at all’. One of the many advantages his script has over the quarter million or so currently in circulation is that it incorporates a long list of well known hit songs by major musical artists that any true filmmaker will immediately recognize are ‘absolutely essential’ to the narrative. When a contest judge pointed out that licensing those works would probably be prohibitively expensive, he says that only goes to show how little these scams are worth.

“Eh – I think Sony and Lionsgate can afford to pay for a few songs. These people just can’t see the forest for the trees!”

In preparation for the day when his script becomes the subject of a bidding war between the studios, Sean spent his last remaining savings on a local attorney he saw on late night TV whom he retained to fashion a custom contract. The normally ruthless ambulance chaser felt bad about taking his money, but Sean was insistent, so a standard work-for-hire contract was amended to guarantee Sean sole screenplay credit, the right to veto any proposed changes to his dialog, and joint final-cut approval together with the director. Another local aspiring writer, thinking it was a joke, laughed when Sean showed it to him. Needless to say he is not Sean’s friend anymore.

“We’ll see who’s laughing when I’m living in Hollywood with Scarlett Johansson as my neighbor.”

Are you serious about screenwriting? Then get Jim Mercurio’s excellent new book “The Craft of Scene Writing: Beat by Beat to a Better Script” out now!