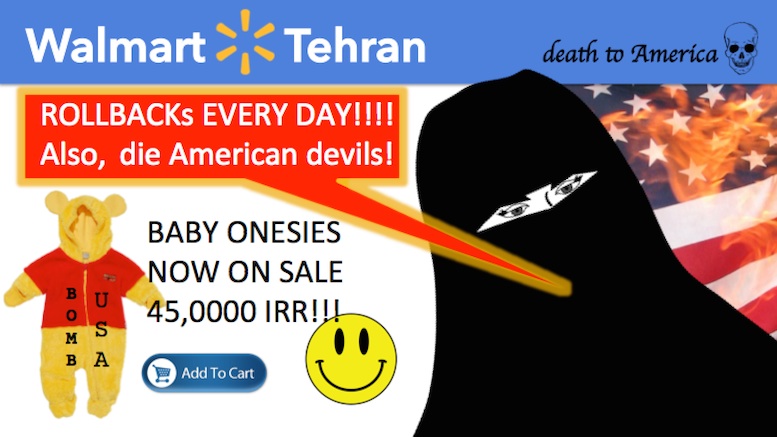 The political ramifications of sanctions on Iran being lifted may be getting all the attention for now, but it’s the world of unabashed consumerism that going to be the next big story. Companies like Walmart say they have done extensive research, mainly by watching state-controlled Iranian Television, to determine what it is that motivates Iranian shoppers.

“The answer is fashionable clothing, electronics, and anything that screams Death to America!”

Walmart is hoping to position itself as the market leader in Death-To-America branded merchandise, and has teamed up with a number of well-known celebrities to develop an upscale ‘Down with the USA’ collection.

“Fortunately, there’s not a single product in our inventory that can’t be branded as a ‘Death to America’ product.”

With Target reportedly developing a hip ‘USA SUCKS A**’ line of clothing for Iranian youth, Walmart is wasting no time establishing themselves. They are already building a ‘USA is the Devil’ 24 hour Supercenter in a suburb of Tehran, and the online store is already functional. They believe they know what the biggest seller will be.