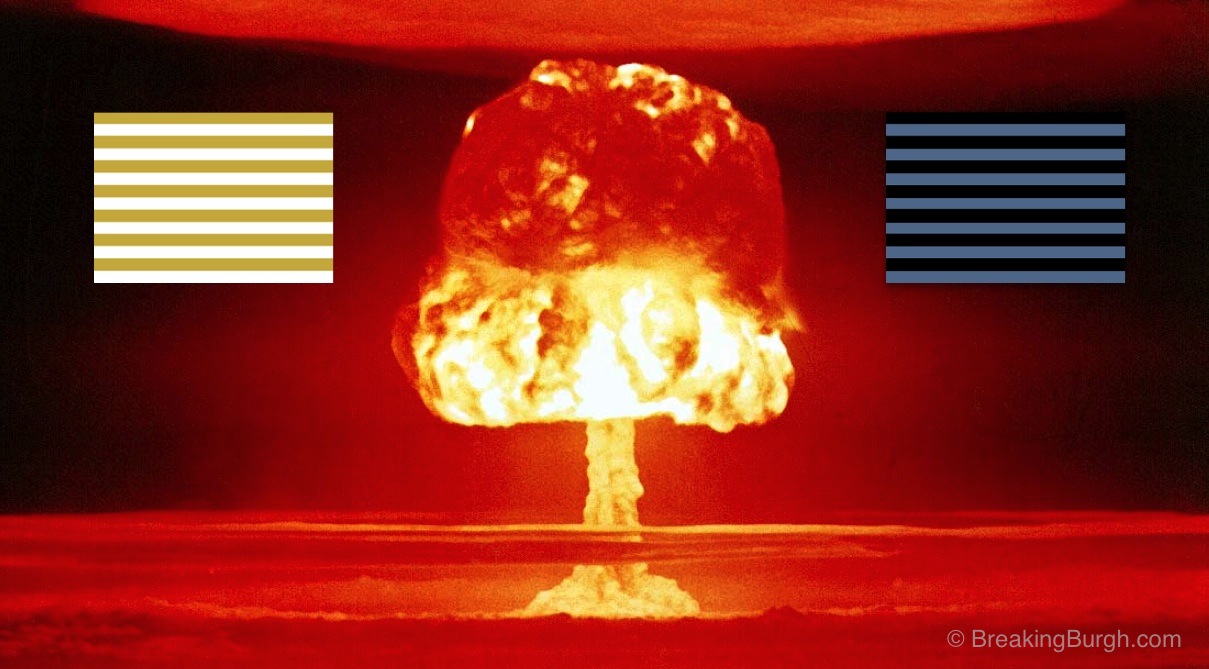 Everyone on planet Earth who doesn’t live under one of its many rocks has heard of “The Dress”, which is dividing world opinion into team #whiteandgold and team #blueandblack. It’s getting plenty of play in the media who are having some great fun with it. However, one aspect the news reports have not picked up on yet is that it unfortunately also means the end of Civilization is at hand. Renowned economist and game theory expert Eric Baker PhD explains:

“It’s inevitable that once a schism of this magnitude emerges, the World as we know it will come to an end. The bomb is now primed, so to speak.”

The problem is that escalation of a dispute this widespread and entrenched is unavoidable, and it is therefore simply a matter of time before it becomes physical, eventually leading to pervasive open armed conflict. Even Dr. Baker is surprised that this could have come about from the posting of a picture of a dress by someone on a remote Scottish Island that was picked up by some fun-loving Australians.

“I would never have thought the conflict to end all conflicts would have originated in this fashion. Then again, the bloodbath that was World War One began with one bozo in a backwater called Serbia. It’s always the thing you least expect, I guess.”

It’s the highly specific ‘either-or’ nature of the dispute that makes it so incendiary and ripe for an apocalyptic climax.

“When you succeed in galvanizing world opinion into a binary state, global annihilation is bound to follow. If this was about allocation of wealth or whom you worship, there might be hope for some uneasy co-existence. But this particular clash of civilizations permits no such accommodation. The dress is either white and gold or it’s blue and black. Well, white and gold, obviously.”

This development does explain something that has troubled cosmologists and philosophers, called the ‘Fermi Paradox’. It asks, if there are so many habitable planets throughout the universe, and presumably bountiful intelligent life, why we haven’t we seen any of them as some would surely have developed interstellar transport capabilities by now. One explanation is that all societies are fated to ‘self destruct’ before they reach that level of sophistication. In the words of one cosmologist:

“This Dress phenomenon effectively settles the question. Basically a society is doomed once it develops a highly efficient means to send photos with pithy messages attached. This matches perfectly with the prevailing hypothesis as humankind was just about to enter its own interstellar phase, with a well-thought-out mission to Mars already underway.”

Not everyone was blind to the possibility that this could have happened. A highly secretive NSA working group was trying to find ways to break the internet before this could have occured, even going so far as to approach Kim Kardashian for assistance.

“She threw her rear into the forefront of battle, God bless her, but sadly even that great ass wasn’t enough to avert the End of Days.”

Some optimists are hopeful that, after the carnage to come, some may survive to rebuild, whether it be a rump of #whiteandgold fanatics or #blueandblack diehards, but experienced Cold War veterans don’t even hold out this hope.

“With the Cold war there was a chance that, after all the missiles had fallen, either the West or the Soviets would survive in sufficient numbers that they could go on to rebuild their society without an enemy to contend with. But this struggle has fractured the globe on such a fine scale, at the level of even the smallest Facebook group, that there is zero chance of a large community of likeminded survivors remaining.”

When asked is there is anything positive to be taken from all this, the aging Cold War warrior turns philosophical:

“Usually when the world has lurched into chaos it’s about something far more ridiculous, like who’s friends with whom, or which deity, who we don’t even know exists, is the best. Here at least we can be proud that we will be fighting over something that is real, with a proper foundation in the science of visual perception. Compared to all the other things we humans fight about, this sounds like something worth being consigned to oblivion for.”