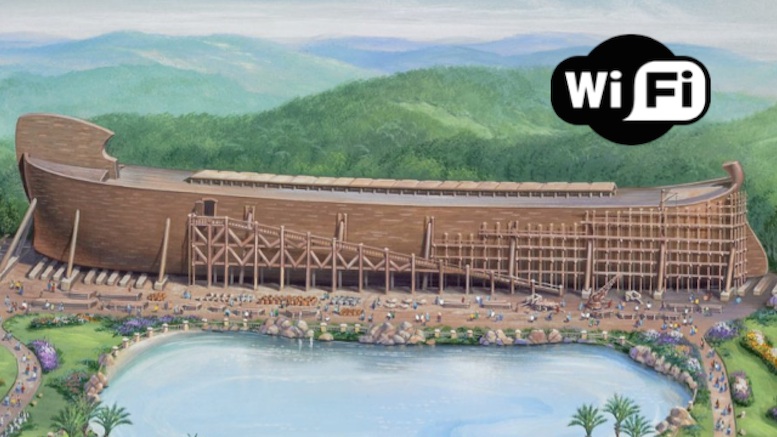 The Ark Encounter Theme Park in Williamstown, KY, is finally open and is proving a great hit with visitors, even skeptical ones who can be frequently be heard saying things like “It’s amazing” and “Now I realize Creationism is right” as they leave.

The reason why it’s changing hearts and minds so effectively is being put down to its following the Bible so precisely. Rational types are concluding that if the Bible contains such a sensible plan for building an Ark, than maybe everything else in it is true as well. Former atheist Kathy Willcott from Seattle is one such person.

“I only came here for a joke as I was passing through the area but it all makes sense to me now. But you’ll have to excuse me as I need to get home to submit to my husband and tell my gay son he’s an abomination.”

People were impressed with the accurate use of Biblical cubits for measurement, the storage for all the different animals, and especially with the free WiFi – both because it allowed them to play Pokeman Go without using up their data, and because it was further evidence of just how faithful the replica Ark was. Consider the Word of God from this passage from the Book of Genesis:

“Go into the ark, you and your whole family, because I have found you righteous in this generation.”

The Lord then continues:

“Speaking of ‘generation’, make sure you equip the Ark with type N WiFi. Do not opt for the slower G standard to save money, because you want to be able to be able to stream movies as 40 days and nights is a long time.”

This Savior leaves nothing to chance:

“If you need to save money somewhere, then skimp on the marsupials – I was never very proud of them anyway as they just seem silly. But be sure to invest in Tyvek homewrap as that will reap savings on utilities later on.”

Any who were still not convinced were ultimately swayed by the surprise appearance of Bill Nye the Science guy, which it so happened was also prophesied by Yahweh:

“Make sure you also bring the natural philosopher called Bill Nye aboard the ark. Do this even if you cannot find a mate for him – which could prove difficult at short notice.”

3 Comments on "AMAZING – Ark Encounter Faithfully Replicates Book Of Genesis Right Down To The 802.11n WiFi"