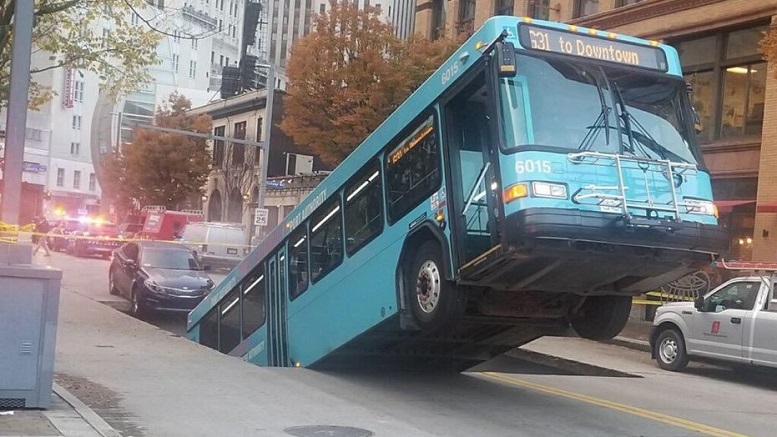 (Pittsburgh, PA) A bus in a sinkhole in downtown Pittsburgh is attracting a great deal of attention, not least from leading figures in the art world who have been inundating the city with plaudits for making such a bold gesture according to local officials.

“At first we thought we should clean it up, but then Ai Weiwei called to tell us it was brilliant.”

UK artist Banksy was quick to congratulate the city and Port Authority Transit on a truly magnificent piece of political street art.

“This is an aesthetically perfect monument to the current state of the United States. Tell the Warhol Museum to not change a thing.”

Meanwhile Christo & Jeanne-Claude have threatened to cover the entire City County building with fabric depicting the Cleveland Browns logo if anything is done to alter it.

“The angle of the bus striving hopelessly to right itself and move the common people forward while the crumbling infrastrucure dooms them to serfdom in full view of heartless high-rise corporations is perfection. It must last one hundred years.”

Experts say the innovative installation on Pittsburgh’s 10th Street works on a number of levels.

“It can be taken literally as a statement on public transportation funding, or as a wider metaphor for the political scene, or as an expression of our futile existance as insignificant organisms destined to die and be forgotten to the sands of time.”