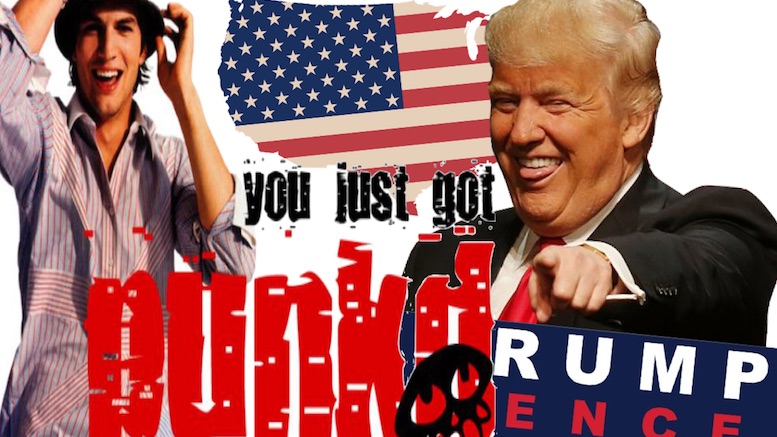 News has leaked of a one-off special of the MTV show Punk’d that is to air tonight after the polls have closed, which host and producer Ashton Kutcher says is the biggest Punk’d ever attempted, being even more awesome than his classic Brittany Spears prank.

“Me and my man Donald J. Trump have Punk’d the whole of America. BIG TIME!”

The existence of the show was leaked earlier today to TV critics who remained stubbornly convinced that Trump’s Presidential campaign was genuine – requiring Trump himself to intervene to convince them it was all a massive joke that he was in on from the beginning.

“Grab them by the pussy? Who says that? And the bit about wanting to date my daughter? And the racism? I would have to be the biggest monster ever to grace American public life if that were real!  Come on, guys.”

The show was conceived when Kutcher met Trump during his time on The Apprentice. MTV originally balked at the prospect of funding a faux presidential campaign until Trump convinced them it wouldn’t be necessary.

“We get free airtime so long as I act like an insane troll ALL THE TIME.”

The Punk’d “Joke’s on you Murica” Special airs jointly on MTV and NBC during primetime at 10pm, 9pm Central.