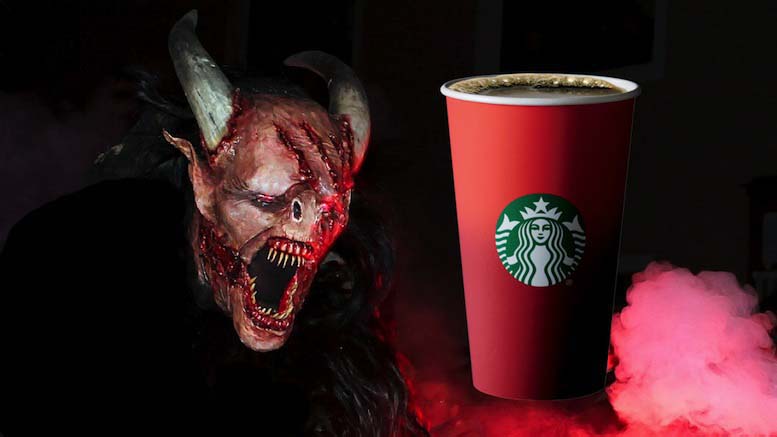 Drink not from this poisoned chalice.

After spending most of the 20th century trying to turn humankind against God by forging war in the hearts of men, the Devil has switched to an even more despicable tactic of late. The Prince of Darkness has chosen to inject evil into the world anew, but not this time in the form of pestilence, famine, and war. Instead the Great Deceiver has tricked Starbucks executives into adopting plain red seasonal cups with no Christmas symbolism, other than the fact of the cups – which are white the rest of the year – being bright red.

Fortunately, even in this secular age, some are still brave enough to do battle for good. God-fearing Christian folk, when presented with their hot coffee-based beverage in the blasphemous container, are urged to give this response to their barista, who represents a direct channel to The Underworld.

“Away with thee, Satan, together with your malevolent hordes that have risen up from the Lake of Fire to insult Almighty God with this bland vessel of reconstituted wood pulp stained with the blood of a thousand virgins, and with nary a redeeming snowflake upon it.”

This should be followed by a prayer vigil at the site of the unholiness, in which the King of Kings is invoked to vanquish all that over which Lucifer has dominion.

“We beseech thee, oh Lion of Judah, great Host of Hosts, the Christ our Lord to make yourself flesh again, so that you may appear in Starbucks locations everywhere and battle the Anti-Christ as has been prophesied. Amen.”

Sadly, such actions are few and far between, with most people accepting the demonic offering without complaint. Even more regrettably, many of the people who purport to recognize the evil nature of the Starbucks Corporation completely misunderstand what the real problem is. One disgruntled customer, who is a typical example, had this to say.