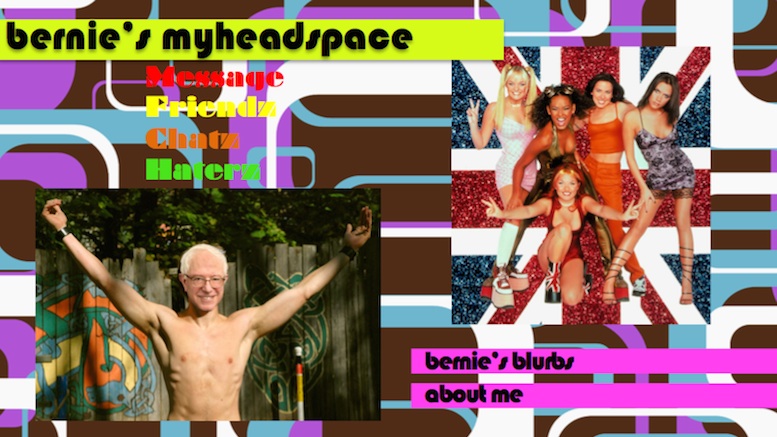 The Bernie Sanders Campaign is in emergency mode as it awaits the fallout from the discovery of the Senator’s old MySpace profile which he had long forgotten about. Unfortunately the account was never erased and its contents are expected to be highly damaging if not fatal.

When asked for comment, Sanders explains that it was the freewheeling ability to setup your MySpace page anyway you wanted – even if it looked totally cluttered and unintelligible – that gave rise to the ‘anything goes’ culture that led him, Tom Hardy, and many others to create profiles that appear almost obscene in hindsight.

“MySpace back then was the social media equivalent of rolling in the muck, and boy did I roll!”

Sanders draws a great deal of support from modern social media platforms, and hopes his youngest followers realize that some things appear nastier simply by virtue of being on MySpace, which ought to be taken into account when passing judgment on him.

“Just try photo-shopping your Facebook and Twitter selfies onto an old MySpace page. I guarantee you they will suddenly appear 500% filthier.”

But one thing the Vermont Senator says he can’t blame MySpace for is the ballscaping.

“What can I say? My only defense is that the beauty of the great state of Vermont when the leaves are turning is overwhelming. In a perverse way photographing it with a hint of my unfocused testes in the foreground was meant as a mark of respect.”

Even if the release of his embarrassing MySpace profile torpedoes his campaign in the coming days, he hopes it will still have done some good by teaching young people the dangers of being careless with social media.

“Remember kids – once you put something on the internet it can one day come back to bite you in the ass that you recklessly paraded all over MySpace.”