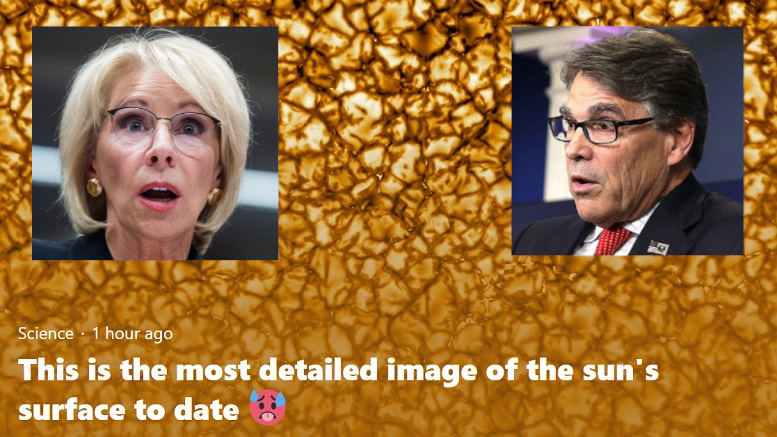 The internet is captivated by an image NASA has released that depicts a close-up of the Sun’s surface. The ultra-high resolution image highlights features as small as 18 miles across, providing unprecendented detail.

Trump Administration Secretaries Betsy Devos and Rick Perry have both taken a keen interest in the finding, given their positions as head of the Department of Education and Energy, respectively.

Their fascination was confirmed by NASA officials, who said both had called during the day with the same question.

“They wanted to know how the astronaut who took the photo didn’t get burned.”

Staff scientists tried to explain to Perry that the photograph had been taken by Daniel K. Inouye Solar Telescope in Hawaii, but that only made the DOE chief even more confused.

“No I’m taking about the picture of the Sun, not a picture of Earth.”

When they tried the same explanation on DeVos they didn’t fare much better.

DeVos wondered if NASA could make the astronaut who took the picture available to tour Public Schools, which she said would be inspirational.

“But only if his facial burns are not too bad – we don’t want to scare the kids.”