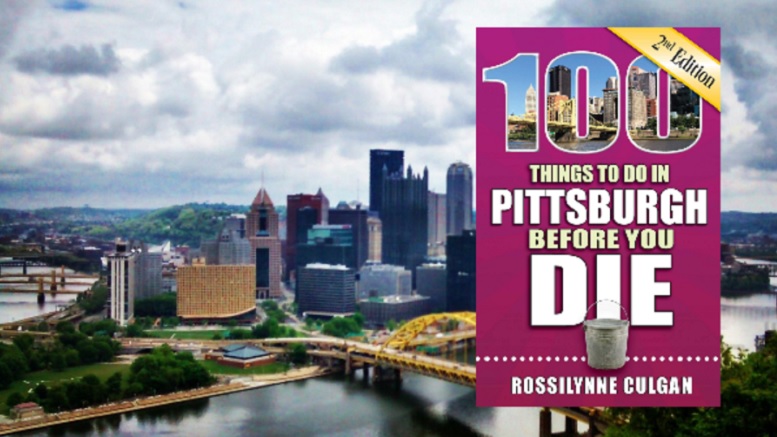 We like to imagine how the pitch for the first book in this series went: “We’re going to remind people of their mortality then give them something to do to avoid comtemplating the fate that ultimately awaits them.” Hey – it worked! This is the 2nd Edition of the Pittsburgh version by Rossilynne Culgan of The Incline. It was released earlier in 2019 so it’s nicely up-to-date.

Here’s a great tip if you have difficult relatives coming into town. Instead of having them pester you for ideas about what to do, hand them a copy of this book. You won’t even see them most of the time and they won’t be bored and irritable when you do. Everybody wins! For the locals it’s a chance to see how many things you’ve done already and to plan to check some new ones off the list in 2020.

Part of the joy of a book like this is that it has to be selective, meaning you get to experience all those bursts of outrage when it doesn’t align with your own personal preferences. For example, in the Pittsburgh Pizza entry there is mention of Aiello’s and Mineos in Squirrel Hill but no Napoli, at which point we flung the book across the room and considered burning it before deciding against it. If you have no impulse control you should buy multiple copies.

With 100 entries there is room for some lesser-known gems such as Banjo Night and Garfield’s Unblurred event on the first Friday of the month. For sports fans there’s the Riverhounds at Highmark stadium in addition to the obvious trio of Pirates/Pens/Stillers. Each entry is a nice short informative paragraph or two with locations listed.

Be the first to comment on "BOOK REVIEW: 100 Things To Do In Pittsburgh Before You Die"