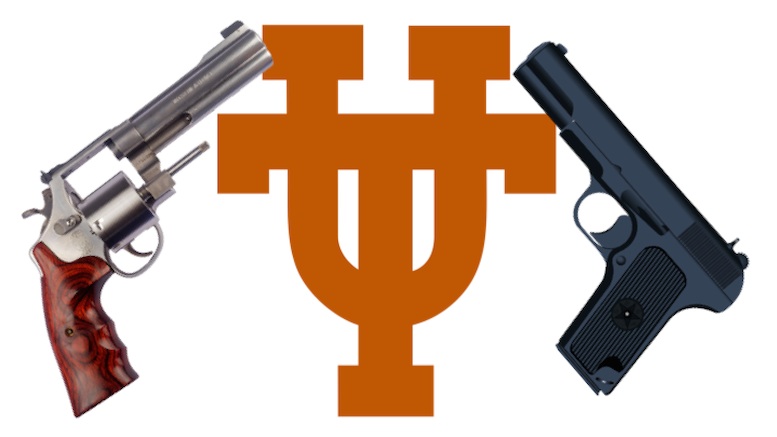 [Houston, TX] Texas is the latest state to pass campus carry laws that require public educational institutions to permit concealed handguns on their property. Despite the howls of complaints about academic freedom being threatened, in reality there will be enormous benefits to higher education as failing students like Brad Hursey are now expected to graduate with flying colors.

“I also welcome the fact that it has made the admissions process far less competitive.”

Far from being upset with the policy to allow concealed weapons on campus, Brad says it is critical to his plans for academic success. As a mature student over the age of 21, Brad is exactly the type of person who will legally be allowed to carry a concealed gun anywhere on campus if he so chooses.

“My plan is to introduce myself to my professors on the first day, politely explain that I’m hoping for a 4.0 and will be very angry if I don’t reach my goals, then say I must excuse myself as I have time booked at the local firing range.”

This is not Brad’s first time in college – he was sent to a very expensive private liberal arts college right out of high school. Unfortunately its strict ban on weapons of any kind severely impacted his ability to persuade his teachers that he deserved better grades for his total lack of effort, and he had to drop out.

“Thank you University Of Texas for giving people like me a second chance.”

Brad doesn’t actually own a firearm himself – nor does he intend to obtain one as he believes they are far too dangerous to keep around the home – but he doesn’t think that will affect his ability to maintain a 4.0 GPA at the University of Houston given the general air of terror that will hang over the classroom.

“No-one is allowed to inquire whether a student is armed so they are basically forced to assume I’m packing. Just to be on the safe side I’ll make sure to fake taking a phone call from my ammo dealer whenever I’m handing in the blank sheets of paper I expect an A+ on.”

He’s also ordered a Ted Nugent baseball cap and an NRA-branded laptop bag, in case any of his professors are slow on the uptake. Brad is particularly looking forward to all the credits he will get for signing up for discussion seminars.

“The great thing is that if you get bored all you need to do is bring up a sensitive topic that makes all the right-wing nutjobs unhappy and they have to end the seminar immediately for safety’s sake.”