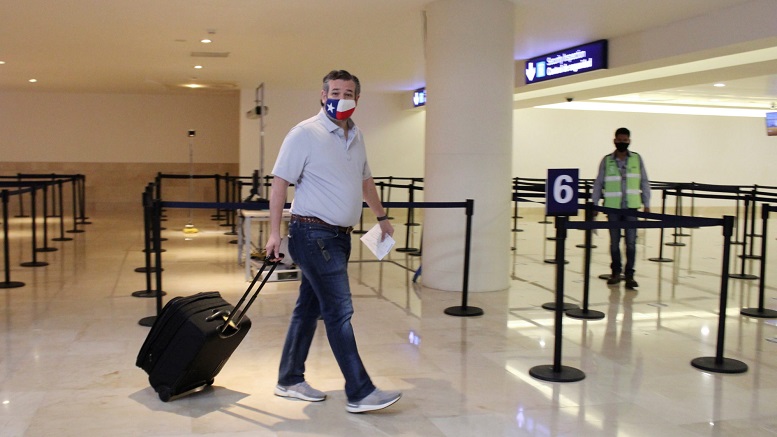 Adulation and plaudits for Ted Cruz are flooding the internet and social media today after the Senator for Texas took a hands-on approach to caring for the millions of people freezing to death in his state that puts other politicians to shame.

“Commendations to Ted Cruz for not just being a spouter of empty rhetoric like most pols. Instead he shows us exactly how to cope with a devastating blizzard by getting off his butt and into the United Airlines preferred flyer lounge en route to Cancun!”

The very few critics who doubted Cruz’s dedication to the electorate that voted for him were quickly shut down online.

“The haters of Ted Cruz should know he’s already directly intervened to save the lives of 5-8 Texans directly related to him AND showed the remaining 29 million how they can save themselves with just a passport, 80,000 airlines miles, and a few thousand dollars to cover accommodation, food and resort fees.”

Cruz was also praised for the remarkable flexibility he has shown in dealing with a crisis.

“This is a Senator who has made a career of undermining big government and national infrastructure, yet when the blizzard hits and his state falls to pieces due to his policies he’s not ashamed to criticize FEMA for not getting here fast enough. What a guy!”