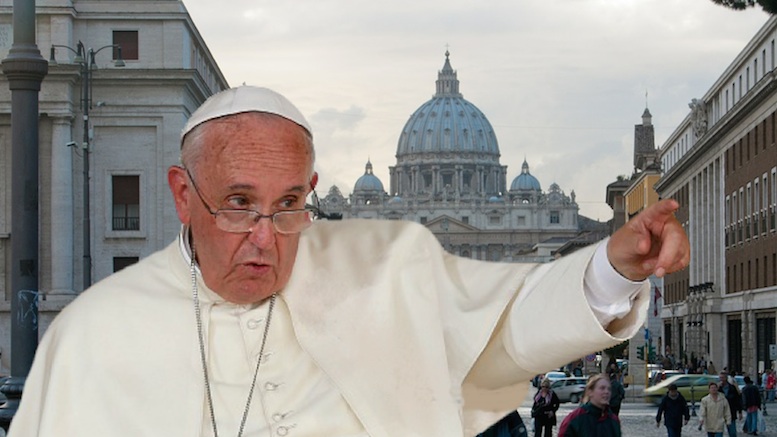 After more than two thousand years of operation, the Catholic Church is to dissolve itself and liquidate its assets which are to be distributed amongst its 1.2 billion adherents. The action was decided on after news reached the College of Bishops that Pope Francis had given bad directions to a pair of tourists.

“This proves the Pope is fallible, which means this was all a big mistake.”

The misled vacationers, David and Kathy Marshall of Tampa, Florida, are not religious, but were visiting St. Peter’s Basilica for it’s architectural beauty. They wanted to see the Coliseum next, but David was having difficulty understanding the map in his tourist guide. Kathy goaded him into asking for help.

“He hates asking for directions.”

They approached someone whom they initially thought was a street performer, and therefore likely to be well informed about the city’s layout. Pope Francis eagerly told them which way to go, as he enjoyed being treated like an ordinary joe by the indifferent couple.

“We spent ages looking for the Coliseum in the completely wrong area because the Pope was so adamant he knew where it was. Typical man.”

They later mentioned his error to the hotel concierge, who, being a local and a Catholic, recognized the incident for the ecclesiastical calamity that is was and informed a cardinal he was friendly with.

“I guess if there really was an all-powerful God he could have moved the Coliseum to the where Pope said it was to make him infallible again. But it’s still in the same place so it looks like the atheists were right all along.”