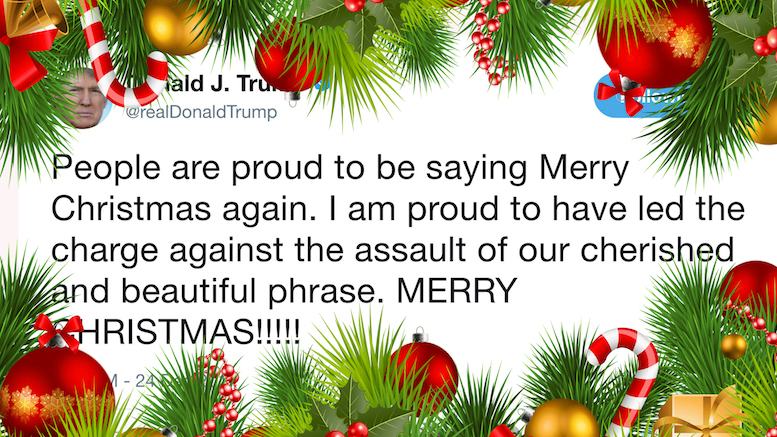 President Trump has declared a turning point in the War on Christmas, saying that people can finally say Merry Christmas again after years of it being a punishable offense leading to imprisonment, or even death if accompanied by some kind of blessing.

“All Americans under the age of ten have never received a Christmas present and don’t even know who Santa is because their whole lives were spent under Obama. Sad!”

Indeed, the anti-Christmas campaign has been so unrelenting that 99% of Americans have already forgotten what Christmas is, which exists to them only vaguely as something people celebrated a long ago when America was great the first time around.

But today has brought new hope after President Trump announced he has turned the tide, and some dare to dream that eventually there may even be Christmas music on the airwaves.

“Perhaps ‘O Holy Night’ will once again be heard somewhere on American soil.”

Though it’s unreasonable to expect more than a few hundred people to get up to speed on Christmas to celebrate it properly this year, President Trump is introducing free Christmas education classes to teach people what it is in time for December of 2018.

Store owners will also be eligible for professional consultations on how to market Christmas with colorful merchandise and will receive subsidies to bring back the long-lost tradition of having a ‘Christmas Grotto’ to draw families in to shop.

STUCK FOR A LAST MINUTE PRESENT? -> GIFT A BOOK BY BREAKING BURGH: