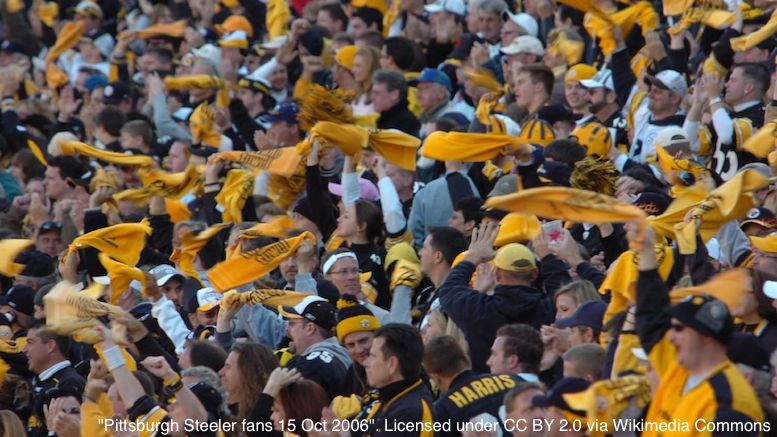 Yinish speakers can often be identified by their ‘torbel tahl’ (trans: ‘terrible towel’).

It has long been an open secret in Pittsburgh that a two-tiered system has been in operation to account for the de facto, if not de jure, usage of two distinct languages in the day-to-day affairs of the city. For example, translation has long been a feature of area courts, when defendants or witnesses from places like the Southside say something completely unintelligible to English speaking federal appointees to the bench who did not grow up in Southwestern Pennsylvania.

“What the hell did that person just say?”

Fortunately there are usually enough city cops around to translate, though they have never received official recognition for these duties that they perform each and every day. This will soon change if Don Nesbit from Mt. Washington has his way, as he has made it his personal mission to secure official recognition of Pittsburgh’s homegrown language. Initially it looked like he would never get anywhere, until he cornered Mayor Peduto during the ribbon cutting ceremony for a Southside Works loft apartment complex. He challenged the mayor to put the matter up for a council vote, and the resulting exchange was witnessed by a number of witnesses.

Peduto:   Just because you say it’s a different language doesn’t make it so.

True to his word, the spirited mayor invited Don to make his case to city council. Don was determined to make his brief moment in the spotlight count.

“Aw stawnd here before yinz t’day in a simple plea for justice n’at. Menni yinz may nawt think this is important and aw should git back to supporting dem stillers n’buccos and keep maw mouth shut. But mawn kennit live un ‘arn city n’ priman’eze alone. If yinz prick me, do I nawt bleed black n’ gold? If da car needz worshed, do I nawt worsh it? So I awsk yinz, in the nawm of all that makes Picksburgh grawt – including but nawt limited to progies, spawts, and dahhhhn-ni aris – I awsk yinz t’ lit our language git the recawgnition it deserves.”

The speech brought rapturous applause from representatives of the 1st and 3rd districts, while others turned to Google Translate and Curt Wootton’s Youtube channel to try to make sense of what they had just heard. Fortunately it was enough to carry the day and the motion to grant official language recognition passed, guaranteeing all Pittsburgh residents the right to have official petitions and hearings conducted either in English or in the language of the late great Myron Cope.

There was still the matter of the official name for the new language, which has been informally referred to as Pittsburghese. Don was delighted when council selected a different name that he is proud to have come up with himself.

Official city translators are currently being hired and complimentary English-Yinish dictionaries will be mailed to all Pittsburgh households by the end of the year.