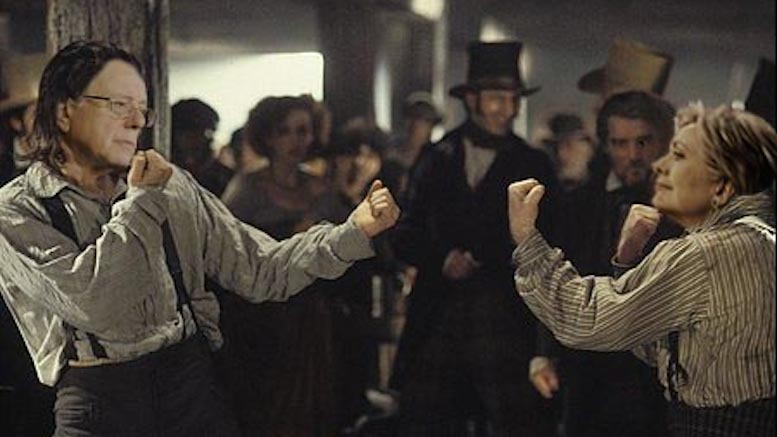 [New York, NY] Democratic candidates Hillary Clinton and Bernie Sanders found themselves in close quarters while campaigning in New York City this morning, resulting in a no-holds-barred dustup between them that only came to an end when their respective staffers intervened. Independent witnesses described the approximately-ten-minute scrap as a draw.

In a scene reminiscent of a Scorsese movie, Clinton and Sanders had first sized each other up and were about to get into it when Sanders said it was wrong for a man to fight a woman.

“What you scared of, bitch?”, taunted the former Secretary of State, “Can’t take me without all your precious guns you love so much?”

Sanders came back with a dig that she must be lost because Wall Street was on the other side of town and they were soon wrestling each other on the ground. Passers-by described it as a good dirty fight with each kicking dust into the other person’s eye and employing the occasional bite if needed to get out of a headlock. Clinton made a strong impression on the crowd.

“I was impressed by Bernie of course but then again I expected as much from a tough Jew born and bred in Brooklyn. But to see Hillary bare her teeth like that and really lay into him – it goes to show she’s a real New Yorker too at this point.”

While inside-the-beltway commentators complained that this was all very unsightly for aspiring Presidential candidates, neither campaign sought to take advantage by portraying the other as uncouth, since they both instinctively knew that once you’re inside the five boroughs, decorum goes out the window.