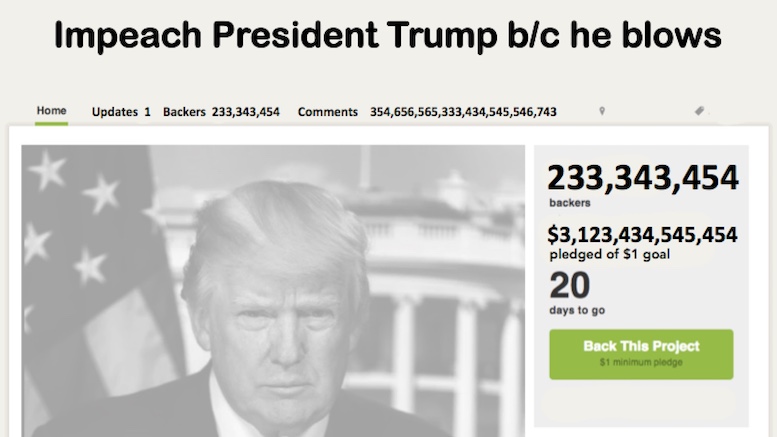 A crowdfunding campaign to impeach President Trump is threatening to crash the servers of the hosting company who say their platform is not used to dealing with this level of enthusiasm and support.

“We’re not really equipped to handle payment processing for this much money.”

Forest Hills PA resident Paige Williams, who launched the campaign as a joke to blow off steam, says she knew something strange was happening after she clicked to make it go live and then went to pee.

“When I returned to check on it 20 seconds later, ten million dollars had already been pledged. I know, I go fast for a girl.”

Paige has since shut down the campaign to new donations after it topped three trillion but says people still find a way to give to her cause.

“They just knock on my door after shoveling a truck load of cash onto my front lawn and tell me to get on with it.”

She’s even got in touch with Special Counsel Robert Mueller to see if he’ll take the money, which now amounts to more that the GDP of most of the world’s nations, off her hands.

“He was very polite and said that even though it would allow him to hire a further 1,938,343,123 full-time investigators which would be very helpful, he can’t help suspecting it would open him to accusations of bias, so he had to decline.”