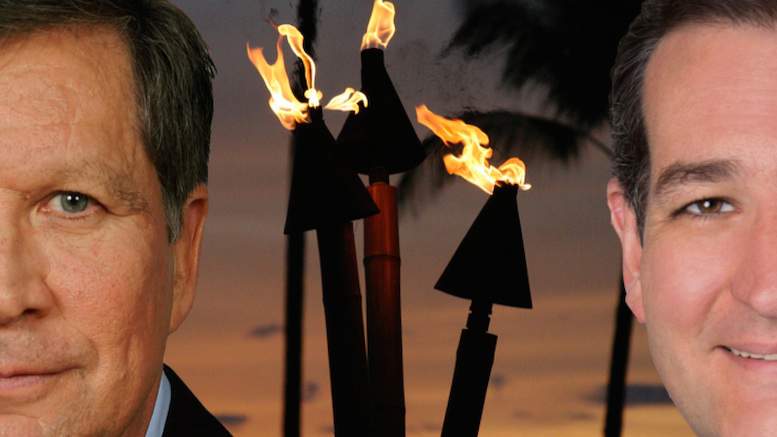 [Ducie, Pitcairn Islands] Reality TV fans are in shock following the surprise alliance between survivor contestants Ted Cruz and John Kasich, which they never expected to occur this late in the season.

The popular show, which transferred from CBS to possibly determining the future of the nation, has seem some of its best ever ratings for its latest incarnation ‘Survivor GOPhers’.

As with every season, the weak and the most hated were weeded out long ago, and the contest has been dominated by Reality TV veteran, Donald Trump, whose polarizing grip on the audience harkens back to the days of Richard Hatch in season one way back in 2000.

But Hatch was also known for forming the first ever alliance, which has been a hallmark of the brutal contest format ever since. Though there have been previous attempts to form alliances between the GOPhers (which were strongly encouraged by producers), these generally failed due to the contestants’ virulent hatred of each other.

But with the numbers down to three, it has become clear to contestants Cruz and Kasich they would have to cooperate if they were to have any chance of stopping Donald Trump, whose feral vulgarity and total absence of shame makes him especially well suited to surviving in the wild.

On the neighboring atoll of Oeno – which plays host to spinoff show ‘Survivor D-Kats’ – Hillary Clinton is still stubbornly insisting she should have immunity by now.