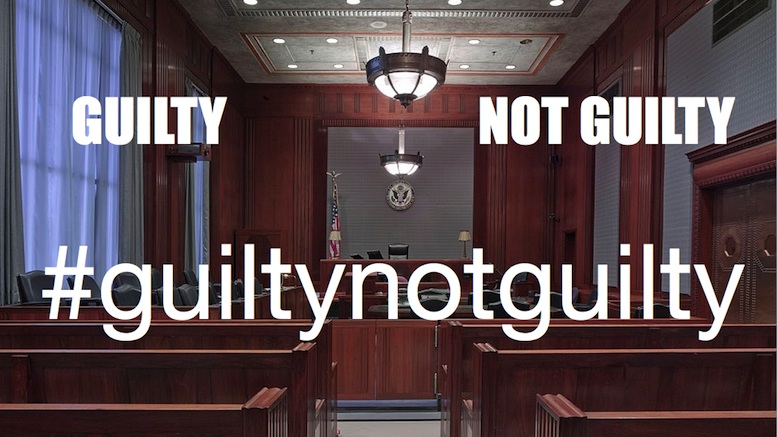 [Washington, DC] Jurisprudence in the United States underwent a major change today as the Supreme Court decided that a new plea of ‘Guilty, Not Guilty’ is constitutionally required in addition to the previous possibilities of ‘Guilty’ and ‘Not Guilty’. The change was supported by the Obama administration, with the Solicitor General making the case before the highest court in the land.

The argument was forcefully made that, whereas, previously, only pleas of ‘guilty’ or ‘not guilty’ (and, in limited circumstances, nolo contendere) were allowed, this was no longer sufficient to deal with the sophisticated understanding of culpability and contrition exhibited by modern defendants raised on social media. In particular, neither pre-existing option allowed for an obviously at-fault party to express guilt, then quickly negate that with a clear disavowal of feelings of guilt a mere fraction of a second later.

“Choosing from ‘guilty’ or ‘not guilty’ may have been adequate for the relative simpletons that made up this country at the time of the framing of the Constitution, but it is manifestly insufficient for modern jurisprudence in an age of Twitter and Instagram.”

The motion to allow ‘Guilty, Not Guilty’ pleas was opposed by a coalition of technophobes, other old people, and students who were rejected by the Greek system. But with Justice Scalia no longer on the bench – who, as an originalist, would no doubt have opposed the change – the motion was adopted.

As with traditional guilty pleas, a defendant who pleads ‘Guilty, Not Guilty’ may be afforded a lesser sentence in return for not wasting the court’s time, though prosecutors and judges are also free to impose an even stricter sentence as punishment for being a total ass.

Be the first to comment on "Defendants Now Allowed To Plead ‘Guilty, Not Guilty’ At Trial"