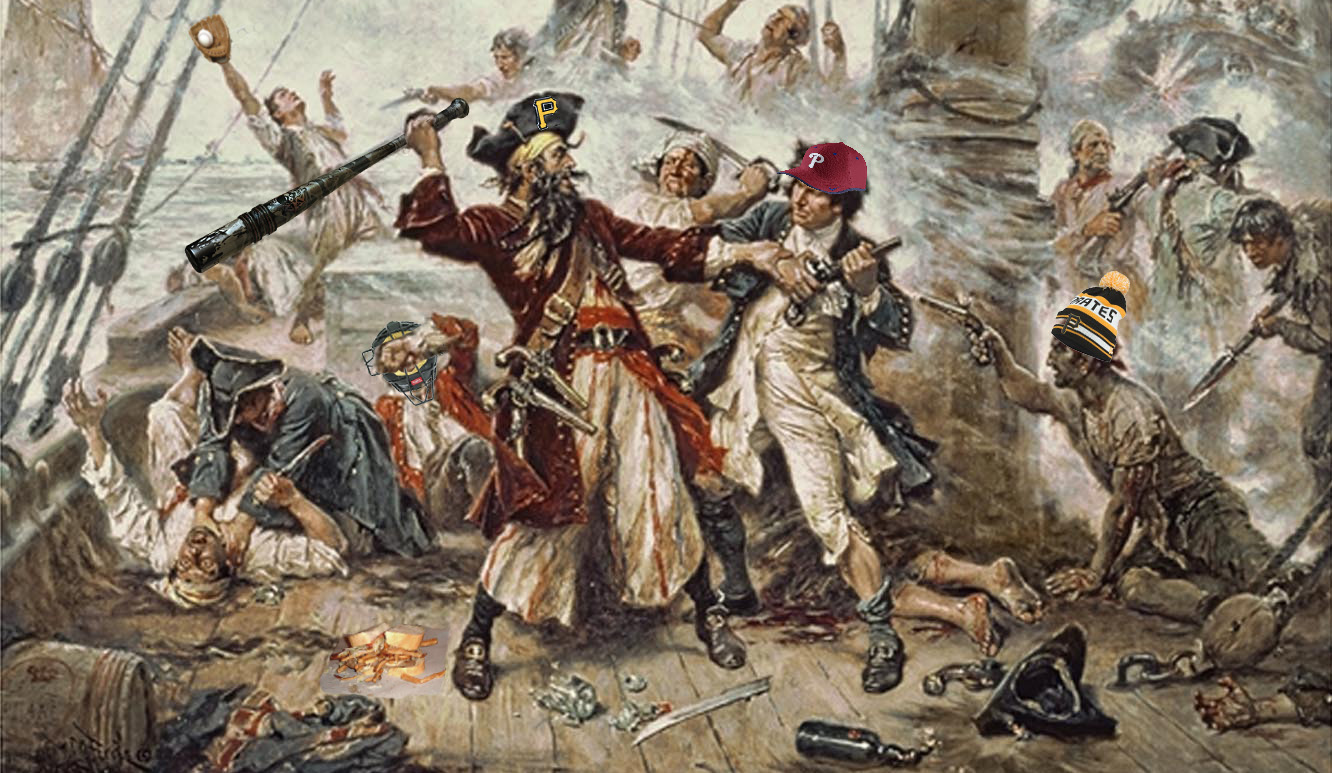 Typical game against the Phillies.

As home opening day arrives for the Pittsburgh Pirates, they look to be in great shape to provide us with an entertaining, and hopefully winning, season. But, unknown until now, a dark cloud had been hanging over the ballclub until as recently as last week, due to Florida native Orlando Teach, who just recently relocated to Pittsburgh, having signaled his intent to sue the ballclub for infringement in relation to their name and brand identity. This was cause for considerable concern because Mister Teach happens to be the great-great-great-great-great-great-great-great-grandson of English-born Edward Teach, otherwise known as Blackbeard, who terrorized shipping around the West Indies and eastern seaboard of what was then the American Colonies in the early 1700s.

As word of the looming litigation spread throughout the organization, players did not hold back with their opinions, despite an official prohibition on discussing the matter. Josh Bell wondered why it was always the baseball team in this town that seems to have the worst luck.

“Last time I checked no-one on the Steelers roster was smelting iron ore on the Mon, but you don’t see them getting hauled into court.”

Presumably the lack of legal disputes in that instance was because both the Steelers and U.S. Steel felt they benefited from the mutual association, and neither party was a washed-up diving instructor like Mr. Teach. The Pittsburgh Penguins, conversely, have never had to worry about such a circumstance as animals are not granted standing in the American jurisprudence system.

Though the ballclub was initially worried about the prospect of litigation, their lawyers last Friday determined that there was little cause for concern, since, with Blackbeard having ceased his pirating activities almost three full centuries ago as a side effect of his demise, there is no direct cause for action. A successful lawsuit would therefore have to establish definitive harm as a result of Mr. Teach’s own pirate identity being impacted. The direct descendant of Blackbeard is adamant he is personally injured by the association, even though many would argue there is little to identify him as a modern-day pirate.

“Maybe I don’t traverse the high seas of the Carribean or say ‘Arrrggghh me pretties’ as much as I should, but that doesn’t mean I’m not a pirate, because it’s in my blood. And I have a parrot – a real one, not some guy in a costume.”

Surprisingly, Orlando is not after money, but instead wants the Pirates players to properly live up to the spirit of Blackbeard in their actions and appearance if they continue to invoke his memory. He does concede that former pitcher A. J. Burnett exhibited some piratey traits his ancestor would have respected, and that Andrew McCutchen sometimes looks the part with his earring and do-rag when he was here. But he wants to see the entire team embrace their inner swashbuckler, which he says he will fight for in court if necessary. When asked the precise nature of his legal argument he is a little vague.

“Copyright infringement or something to do with trademarks maybe? There’s got to be something. Where would they be without my ancestor’s contributions?”

In a voluntary meeting with the aggrieved eight-times-great-grandson, manager Clint Hurdle didn’t have the heart to point out to Orlando that his notions about pirates owed more to Robert Louis Stevenson and J. M. Barrie’s Captain Hook than to the reality of his relative’s life. But the affable manager did promise that he would push the players to up their Pirate spirit this season, which appeared to go a long way towards appeasing Orlando.

“We also offered him a ‘settlement’ of a season ticket and some merchandise.”

Orlando happily accepted and expects to attend every game dressed exactly like Robert Newton in the 1950’s classic ‘Treasure Island’.