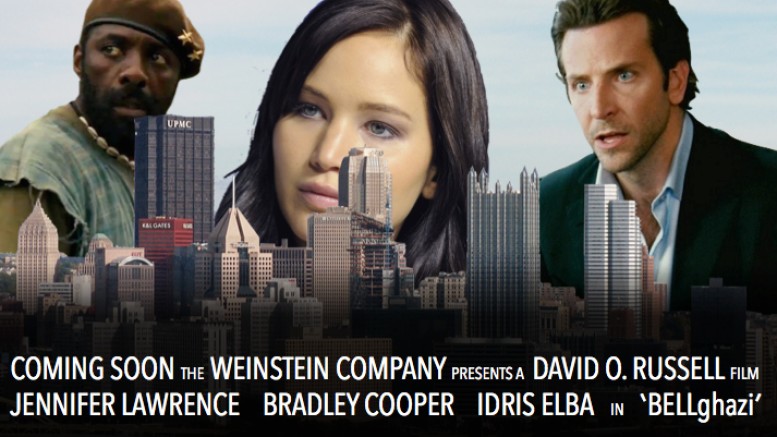 In the latest twist of Pittsburgh’s enduring anchor drama, the firing of Wendy Bell by WTAE is to be made into a film directed by David O. Russell. Principal photography will take place in the fall, with an anticipated release date in time for Christmas.

The incident received national attention via a number of outlets, most recently CNN. This, combined with Pittsburgh’s growing connections to the movie industry, led to the surprise production. David O. Russell, known for films like Silver Linings Playbook and American Hustle, described the moment when he knew he had to make this movie (working title “BELLghazi”).

“One of my assistants who’s from somewhere called Carnegie(?) said she’d written a script about a popular Pittsburgh news anchor who made a mistake and was fired, leading to a series of events that brings the whole city together.”

Russell said he wasn’t remotely interested so she changed it to a story that was the complete opposite – the city polarizes into two bitterly opposed factions – with the added advantage that it was true.

“I was hooked instantly.”

Russell used his considerable clout to fast-track the project, which will be shot chronologically in the fall to allow for the incorporation of future developments. Though the script follows actual events for the most part, some changes were made, such as lowering the age of the main character so that his favorite go-to actor, Jennifer Lawrence, could play the role.

“Jennifer can easily pass for 29, so it’s entirely biologically possible that her character could have five children, especially given that two of them are twins.”

Another change is that in the movie, Wendy Bell’s character is widowed, even though the real-life Bell is happily married to a cardiologist who is very much alive. That was a necessary change for dramatic reasons according to Russell.

“Otherwise how could the main character end up getting together with her nemesis, WTAE Station President Charles W. Wolfertz III (Bradley Cooper), as the city descended into chaos and acrimony around them?”

The African American community will also be well represented, with Idris Alba (Beasts Of No Nation, The Wire) playing a Wilkinsburg warlord who engages in constant battle with his counterpart in the adjacent war-torn neighborhood of Homewood (Forest Whitaker to be confirmed). Rounding out the main cast is a fiery Latina blogger (Selena Gomez) who is quick to take the main character to task over her insensitive use of a hashtag.

“If there’s one thing I want this film to be remembered for, it’s authenticity, as everyone I talk to tells me that’s what Pittsburgh is all about, along with pierogies – whatever the hell they are.”

The attention to detail is evident in a promotional clip already released in which an uncredited George Clooney, playing a thinly-disguised Ken Rice, turns to speak directly to the camera.

Finally there is the question of how the movie will handle the delicate matter of the horrific multiple homicide that started everything. That question was put directly to Russell.

“I don’t remember seeing that in my copy of the script. Is it relevant?”