The Hall of Presidents at Walt Disney World finally is complete again with an animatronic President Trump unveiled after a long wait.

The exhibit was shut in January with plans to open with the likeness of the current President during the summer, but delays meant it was not ready until the end of the year.

Facing criticism for adding it so late, Disney said their “imagineers” had encountered problems with the robotics, including a bug that caused it to reach out every time a woman passed by.

“From a safety perspective that was unacceptable.”

They had also used more advanced technology than previously to allow the Trump version to move about, but that just caused more difficulties.

“No matter where we placed it on the stage, it always attempted to push to the front even though it was only programmed to pace around in its own area.”

Even with all that fixed, it then took the speech programmers a further two months to find something the real President Trump had said that was suitable for a venue frequented by children.

What to get that special person who loves cats and hates Trump? This of course! 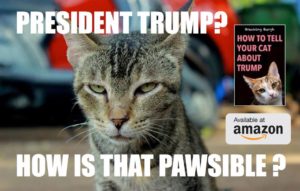