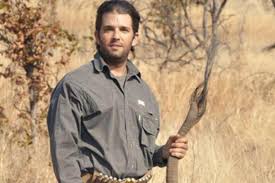 News that six wild elephants died at a waterfall in Thailand trying to save one of their number has saddened people the world over, but none more than Presidential son Donald Trump Jr.

Saying he could barely think about it without getting upset, Trump Jr. called it a heartbreaking tragedy.

“They had so much life to live before I shot them dead for my amusement.”

He takes solace in the fact that wildlife officials prevented two further elephants from drowning in an attempt to save their family members.

“At least they will carry on until I stop their beating hearts and pose next to their massive corpses for my Instagram.”