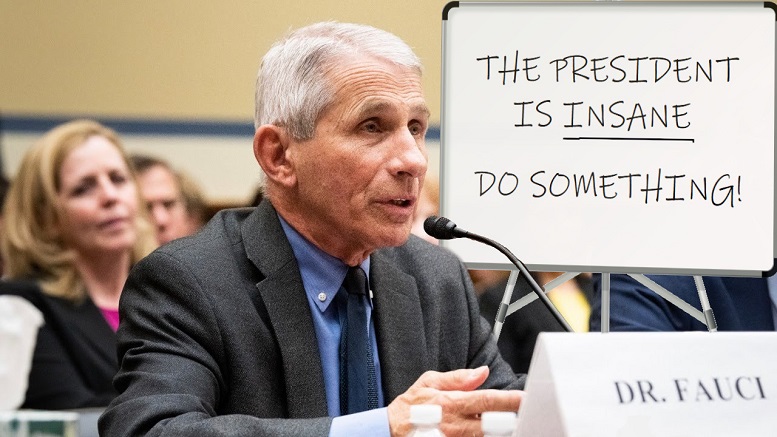 Testifying in front of Congress today, Dr. Fauci – the health official entrusted with the nation’s response to the coronavirus – sent a dramatic secret message to politicians saying all is not well. As Dr. Fauci seemingly praised the President and his administration with his words, he cleverly used a dry erase board to send a secret message using a code Trump is not to be able to decypher to convey his true thoughts to the committee.

Saying out loud that he was drawing a graph showing how successful Trump has been, Fauci instead wrote down a set of short lines and curves designed to completely hide the true meaning meaning from the President.

“THE PRESIDENT IS INSANE. DO SOMETHING!”

A careful analysis of the code used to fool the President reveals it is composed of 26 symbols that are carefully arranged into groups called ‘words’. Known formally as the ‘Latin Alphabet’, those able to read the code can decode these ‘words’ using a cipher called an ‘English Dictionary’. Advanced cryptologists have even been known to memorize the cipher for instantaneous decoding of written messages.

Some were concerned that Fauci should have used an even more secure code like the Vigenère square, however those with inside knowledge of President Trump’s abilities with written messages say there is nothing to worry about.

“President Trump and his supporters will not be able to crack this code in a million years.”