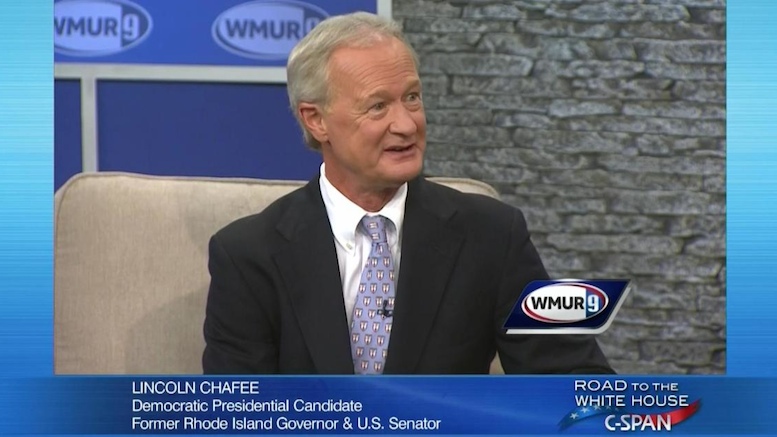 I want my MSNBC.

Days after quitting the Democratic nomination race, Lincoln Chafee is starting to get very anxious because he feels he should have received multiple calls offering him a cable TV show by now.

“Don’t they realize that’s the goal of a hopeless Presidential nomination bid?”

He knows it can’t be because he’s not high-profile enough.

“I’ve been played by Kyle Mooney in an SNL skit. So why isn’t my phone ringing off the hook with lucrative offers?”

He also, like Sarah Palin and Mike Huckabee, has a crazy streak, so it can’t be because he’s too conventional either.

“I’m the one who proposed we change over to the metric system! Who knows what will come out of my mouth next.”

He’s even worked on a possible format and show titles, in anticipation of the networks banging his door down to sign him to a contract.

“I was thinking ‘Linked-in with Lincoln’, or, if they want something really edgy, ‘Chafing Chafee’. I am so ready to pitch this mother.”

“Chuck Todd’s new show is bombing. Hello! Solution right in front of you.”

He is a little worried his chances may have been nipped in the bud by Joe Biden – not just because he’ll be available now, but because of the awesome naming potential.

“He could call it ‘Morning Joe (not the one who’s a jackass to Mika Brzezinski)’ or the obvious but catchy ‘Biding Time With Biden’. Who wouldn’t watch that?”

Update: MSNBC has since chosen to offer Jim Webb a show called “World Wide Webb” in which he travels the globe and gets really angry with foreigners for doing things in some bullshit way he doesn’t agree with.