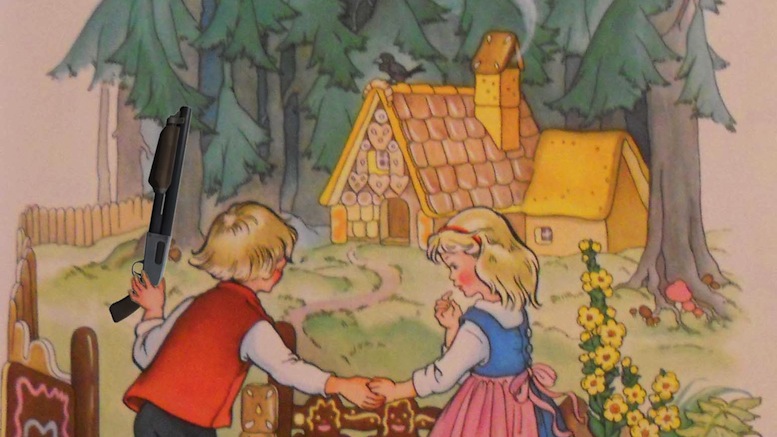 The NRA’s family division – surely you knew there was one? – has started updating classic fairy tales so that the real-world fears they were traditionally supposed to educate children about are magically all solved by the widespread unregulated ownership of firearms. Fortunately, in an effort to combat this assault on our children’s heritage, the ANTNRA (Absolutely Not The National Rifle Association) has formed their own family division to produce more realistic gun-imbued treatments of folk stories and nursery rhymes that should never have been messed with in the first place – and we have an early peek:

Once upon a time there was a dear little girl who was loved by everyone who looked at her, but most of all by her grandmother, and there was nothing that she would not have given to the child. Once she gave her a little riding hood of red velvet, which suited her so well that she would never wear anything else; so she was always called ‘Little Red Riding Hood.’

One day her mother said to her: ‘Come, Little Red Riding Hood, here is a piece of cake and a bottle of wine; take them to your grandmother, she is ill and weak, and they will do her good. She then turned her back on the child to watch Fox News, while the little girl grabbed the cake and the wine, but also the loaded Glock 9mm her mom had left half-sticking out of her purse on the table.

Being just a child she thought it was a toy and promptly shot her mother in the back for fun. Unfortunately the bullet pierced her aorta so she bled out and died. “I bet I can play dead better than you can”, taunted the innocent child, before putting the barrel to her little temple and pulling the trigger.

A passing wolf who believed that no-one should get any handouts – unless you were a large corporation of course – picked up the scent of cake with his excellent sense of smell and soon pinpointed the house it was coming from.

“I will go in there and scare them and take the cake, which will then be mine by right”, thought the wolf to himself, who believed absolutely in deregulation and tax cuts for the wolves of Wall Street as well as for regular wolves like himself.

But when the wolf entered the kitchen he was so horrified by what he found that he became a lifelong Democrat and a relentless advocate for gun control.

And for the really little ones (but not so little they can’t shoot their brother or sister if they get their hands on Dad’s favorite sidearm because he was too liquored up to remember to put it back in the gunsafe after showing it to his drinking buddies the night before), here’s our favorite nursery rhyme, revisited: