The Obama administration has put forward a surprise resolution to raise funds to improve the nation’s dilapidated infrastructure though the imposition of a ‘Beard Tax’ on citizens of voting age with substantial facial hair. Initially thought to be a prank on Republican members in revenge for embarrassing the Executive Branch in previous weeks, it has assumed growing popularity. Representatives and Senators, who are overwhelming clean cut in appearance if not always in their conduct, quickly came to see the proposal as sound, and it is expected to easily pass with bi-partisan support.

The concept of a collecting a Beard Tax to offset the societal cost of maintaining extensive facial hair is not new and indeed goes back to ancient times. It was notably used by Russian Czar Peter the Great in the early 18th century as he sought to bring his country more in line with sophisticated Western European tastes. The traditional wearing of a beard, considered critical to the Russian male’s sense of virility, was perceived to be exerting a material cost on efforts to modernize the country. Economists advising the Administration contend that those costs are just as real today.

“Just as in Czarist Russia, so to do hirsute gentlemen impose real costs on our economy. To give one example, many thousands of hours of international trade discussions are lost every year as our German and Japanese counterparts spend the first fifteen minutes of every meeting marveling at the exotic beards sported by certain members of the American delegation.”

A big proponent of the bill was, unsurprisingly, the razor lobby, given the pain it has endured since the birth of the modern hipster movement. Some argue that the industry has only itself to blame, as it got greedy by marketing products such as the Mach 4 razor which were ridiculously expensive, as well as being just plain ridiculous.

The measure is paradoxically proving most popular with the most dedicated hardcore practitioners of pogonotrophy, who have seen their thick distinctive beards decline in value as every adult male now feels pressured to adopt facial hair regardless of how many, or how few, follicles they are blessed with.

“There’s growing a beard, and then there’s wearing a few inches worth of raggedy bum fluff on your face, which does nobody any favors.”

Another benefit is that the lovers of less-successful beard wearers, who in the past have not wanted to appear controlling by asking them to shave, can now approach the matter differently.

“I would never dream of asking my guy to shave his beard off just to please me, but now I can bring it up as a solid financial move during tax season.”

The proposal for collecting the tax is complex, but provides for a number of well-defined exceptions. These include grandfathered beards that were grown before 2010, as well as those worn for religious reasons. Bearded ladies are exempted as a class since their beards frequently relate to their employment. Those choosing to evade the tax need not worry about being visited by the IRS, though future tax refunds may be held back if they apply for a passport or driving license, and are seen to have an undeclared beard. 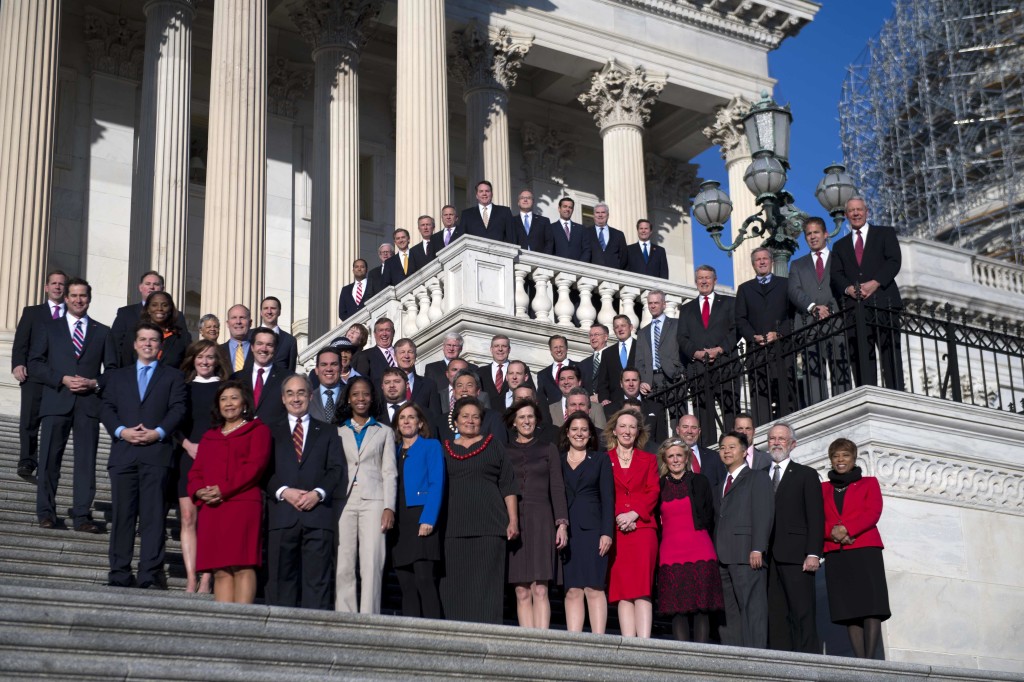 Freshman class of the 114th Congress with nary a beard among them.

1 Comment on "U.S. Government to Introduce Tax on Beards"