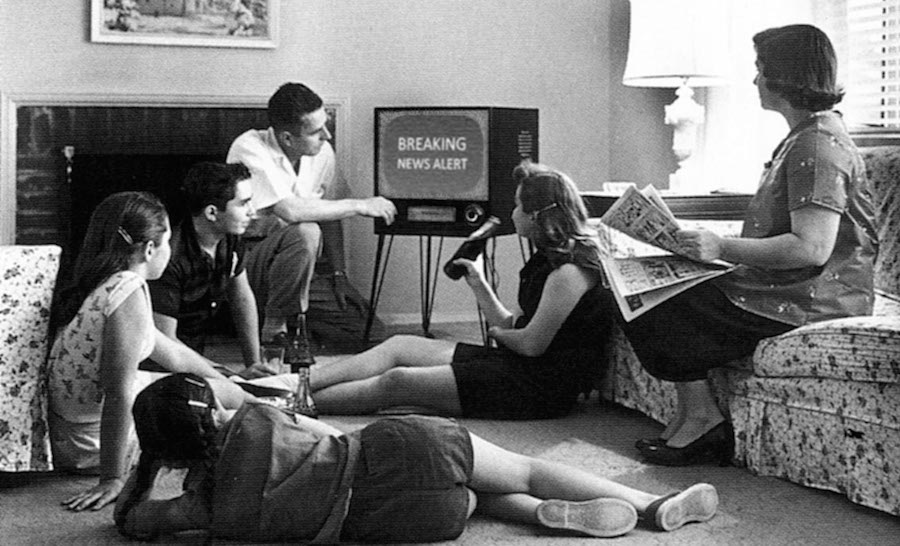 The letter, which found its intended recipient despite only being addressed to “Ken Rice, The News” was all the more astounding for its simplicity and directness:

“Hi. I am five. I have a cat named freckles. Why do we need three local news and weather broadcasts? It occurs to me that one would suffice to keep us fully informed of local happenings and prevailing climatic conditions. I have a cat named-oh-I already wrote that. Bye.”

At a stroke the diminutive, but normal-size-for-her-age, inquisitor set in motion a perilous train of thought at Gateway Center. Why does there need to be three of everything when it’s all the same news and weather? A sense of dread spread like a virus throughout the entire KDKA news hierarchy. The nihilistic despair took even firmer hold in the weather department, as everyone frantically looked for evidence that they were not all mere clones of each other. Only Kristine Sorensen and Jon Burnett managed to avoid descending into paralyzing despondency, because they at least had morning talkshow Pittsburgh Today Live to fall back on, which has no local equivalent. Realizing that their organization was on the brink of collapse and at the mercy of its rivals, they raced to fax the ex-toddler’s letter over to the newsrooms of WPXI and WTAE, where it would prove to be equally devastating.

At WPXI a brave station manager tried to stem the tide by pointing out that they, at least, were different. But when he realized that the news reporter on a nearby screen that he thought was Courtney Brennan from his station was actually sister Kelly Brennen on WTAE, he simply buried his head in his hands, muttering “oh no, oh no” over and over. As word of the newsrooms’ woes got out, the public mercilessly added to their anxiety by openly questioning if they were necessary. This ruthless industry, where you could get instantly tossed aside for such heinous crimes as “not being the face we wish to present right now”, was already a cut-throat bloodbath, but now it threatened to become even more cut-throat and bloodbathy.

People started to ask themselves if Pittsburgh needed local news at all. Perhaps gossiping in the Giant Eagle parking lot was enough. “Isn’t Comedy Central and ironic blogging where it’s at now?” they asked. It soon became clear to the melancholy broadcasters that it was no longer a question of which of them, or even which station, would prevail, but whether local broadcast news would survive at all. In a last-ditch gamble they decided to give the public the news they claimed to want – a single broadcast comprised of one voice, restrained and solemn, and without superficial embellishment.

But then, something unexpected happened. As everyone turned on their favorite channel when they arose, or at noon, 5 or 11pm, they saw nothing at all, or else a solitary unkempt man in a crumpled suit, or a woman with her makeup, if there was any at all, applied listlessly. They listened as a staid monotone voice recited a litany of thoroughly depressing stories about fires and shootings with appropriate gravitas. They started to ask different questions: Where are the tweets? The human-interest stories? The sometimes bland, but also sometimes funny, banter around the newsdesk? Who was going to add some much-needed glamour to local events and charity functions when all the broadcasters are gone? Why does it have to be so grim, because we already know it’s grim.

They realized they would miss the little trill of spying a local anchor seated at the Meat & Potatoes café tables on Penn Avenue. Sure, it wasn’t the same as finding yourself standing in line with Bradley Cooper at an LA juicebar, but it was something, and it was ours, they reasoned. Perhaps, they thought, the news is too important to be trusted to a single network, or, worse yet, regulated to the fickleness of the internet and its strange and bitter progenitors of satire. As quickly as local news had changed, it just as quickly reverted back to the way it was, because deep down that’s what we wanted all along.

And maybe first-graders’ questions are not always the fearless cutting insights we make them out to be, but sometimes just plain dumb, because they’re not old enough to know better yet.

So here’s to you (in randomized order):