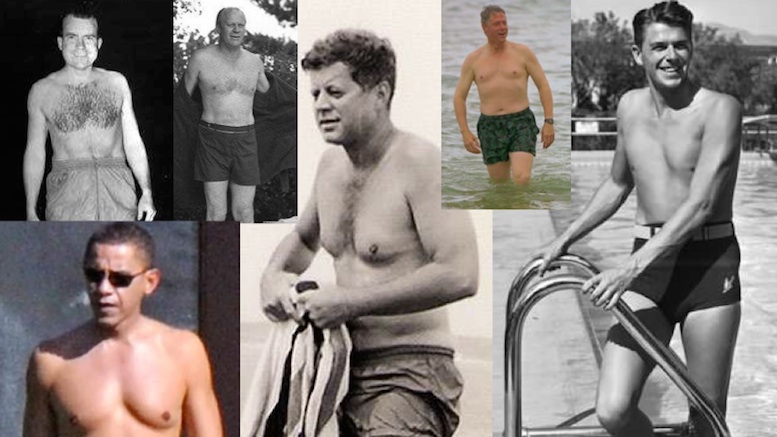 Lots of people are rightly concerned about the pictures of Melania Trump going around and wonder how anyone that morally compromised could ever be allowed near 1600 Pennsylvania Avenue. But it turns out this is not the first time the White House has been sullied by shameless public exhibitions of flesh as we can reveal that many ELECTED PRESIDENTS have GONE TOPLESS.

“From JFK’s suntanned torso to Nixon’s mottled breast – they’ve all been at it! Even the Gipper himself would EXPOSE A NIPPLE OR TWO at a moment’s notice if he thought someone was looking.”

In case you think Hillary would have been the better choice to reassert some much needed morality you would be sorely mistaken given what her husband is known for.

“Make no mistake – Bill may look svelte and the epitome of modesty now, but in previous decades this TWO-TIME PRESIDENT was only too happy to FLAUNT HIS MAN-JUGGS!!!”

And even though previous First Lady Michelle Obama wisely restricted herself to the occasional display of toned appendage, her sense of decorum obviously didn’t rub off on husband Barack – who routinely SPORTED HIS RACK with a smile that screamed “I’M ENJOYING THIS”.

What this means, say self-appointed internet moralists, is that the humiliation of Melania Trump may have to wait given the huge backlog of prior White House occupants who need to have their names dragged through the mud for this kind of behavior.

“Obviously it’s vitally important that we slut-shame the new First Lady for her previous career choices instead of focusing on how offensive her husband is to American values. But first things first – YOU’RE A FILTHY ROTTEN WHORE, WILLIAM HOWARD TAFT.”