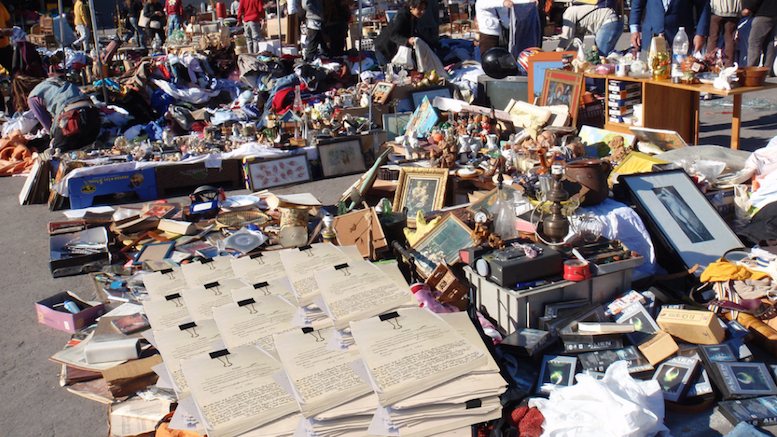 (Imperial, PA) After years of trying, local screenwriter Sean Tierney is ready to admit his dreams of landing a major spec sale may have been over-optimistic. It is also finally dawning on him that focusing purely on writing non-commercial scripts for an industry he has absolutely no connection to was not the best strategy.

“It might have been a good idea to learn how to operate a camera or get any job related to the film industry which pays.”

Not having any marketable skills due to the years devoted to writing stories for the screen that have never appeared on screen, he was stuck for cash. A friend who ran a stall at nearby Trader Jack’s flea market offered him the chance make some money.

“He told me I could take a cut of the takings for any of his knicknacs that I sold, but what really appealed to me was the opportunity to display my many spec scripts to a buying audience.”

Though his impressive pile of screenplays – covering every genre from contemporary western to nonlinear romantic comedy – attracted attention from the bargain hunters, it did not immediately translate into sales.

“Most of them just look at the first few pages then move on. Some will only look at the cover, and, seeing there’s no agent listed, instantly lose all interest.”

Still, he says you never know when a major Hollywood player who comes from area would be visiting home, and would also happen to decide to venture out to buy some 1950s odds and ends for the mantelpiece.

“You get all sorts here.”

Sean is prepared to be flexible when cutting a deal, given that he’s not a signatory with a major LA-based agency, but someone working a stall in a flea market in Southwestern PA.

“Obviously everything’s negotiable – that’s just how the biz is.”

He did have someone read the first ten pages of his zombie script, and was hopeful for a sale or at least an option.

“Instead they told me there was no inciting incident, my characterization was weak, and I was trying do direct from the page.”

When a screenwriting teacher – who was there seeking vintage Jadeite bowls – recognized him from her class, he was concerned she would give him hell for trying to sell his scripts in this manner.

“Instead she was quite positive, saying that as long I as remained in the area instead of moving to California like she suggested, my chances of making a sale at a flea market were as good as any.”