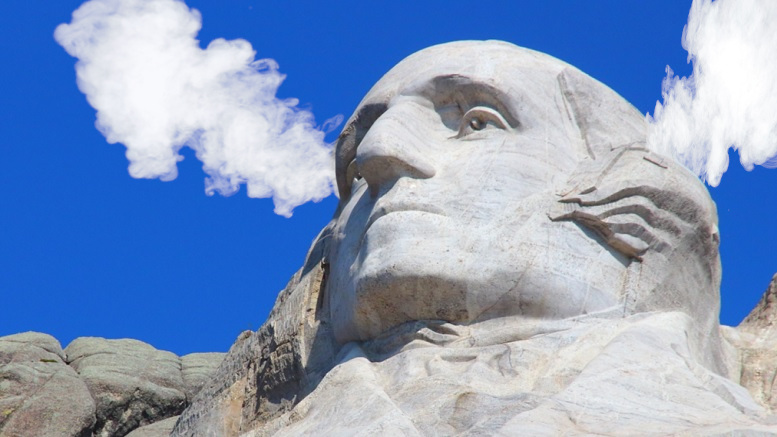 (Keystone, SD) Scientists from the Harold Hamm School of Geology & Geological Engineering at the University of North Dakota arrived at Mount Rushmore today to investigate what they say is an unprecedented geological phenomena that could have consequences for the popular tourist attraction once COVID-19 restrictions are lifted.

Concerns were raised early on July 4th by staff clearing up after a pre-Independence Day event held by President Trump after they noticed what appeared to be white steam emanating from the immense monument. Scientists confirmed the preliminary observations were correct.

“It appears as a bilateral eruption of super-heated water vapor focused on the visage of George Washington.”

Previously thought to be an stable inert granite formation, they say this could suggest hitherto undiscovered volcanic activity beneath Mouth Rushmore that could potentially put visitors at risk, though they note this is at odds with all that is known about the region.

“At this time we quite honestly have no scientific explanation for this, which is obviously of concern.”

Though would not preclude Mount Rushmore continuing as a tourist attraction with appropriate safeguards in place like those at Old Faithful, the scientists fear this may not the full extent of the disturbance.

“Additionally, we are detecting a huge buildup of pressure behind Abraham Lincoln’s forehead that could violently explode at any moment.”

They say the appearance of such an instability has them completely flummoxed given the lack of any history of dynamic processes like this before.

“There were anecdotal reports of some unexplained minor tremors during the second Nixon administration, but whatever that was it is completely dwarfed by what is happening right now.”