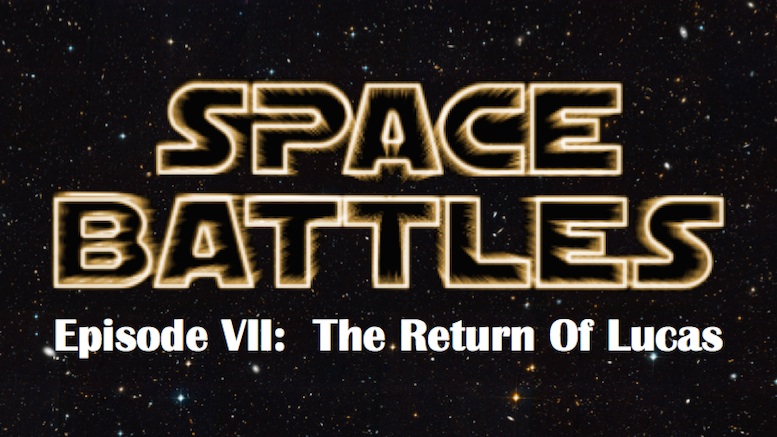 May the ill-defined power be with you.

After endless speculation on whether George Lucas likes the new Star Wars film, and rampant rumors that he wanted more involvement, the director of Episode IV: A New Hope has said he has finally let go of Star Wars once and for all.

“I wish Disney all the best with my baby, which I am completely over as I will now be devoting all my attention to my new project, Space Battles.”

When asked what Space Battles is about, Lucas says it is an epic saga of good versus evil fought out in a stellar constellation a good distance from here. Some have suggested that sounds remarkably like the overarching theme of Star Wars.

“Was Star Wars about that? Yeah, I guess. But isn’t every story about good versus evil on some level?”

He plans to start mid saga, though he says nothing should be read into that as it in no way implies an attempt to pick up his original space opera where he left off in a way that just manages to avoid legal repercussions.

“As you know with my previous Star Wars movies I started partway through which is an artistic choice I like to apply to all my major projects whatever the subject matter. In this case I’ll start with Episode – oh, I don’t know – how about 7 because it’s a lucky number.”

There will be a character very similar to Jar Jar Binks, but that is all above board according to Lucas.

“Despite having paid me four billion dollars for all the Star Wars intellectual property, Disney insisted I keep ownership of Jar Jar for sentimental reasons, as well the rights to my signature wooden dialog.”

Other than the fact that it’s set in space and starts with Episode 7, and involves a battle between the forces of good and an evil organization of some sort, and includes the character of Jar Jar Binks which he owns, Lucas says there are no other similarities.

“My new movie will be nothing like the latest Star Wars movie especially as mine will have lots more very convincing CGI, and the leads are all white.”

Given that his new saga starts deep into a complex backstory involving family dynamics, interplanetary politics, and multiple characters switching from one side to another, one wonders if viewers will be able to make sense of his new film. Lucas is unconcerned.

“I suspect most everyone will be able to figure it out.”