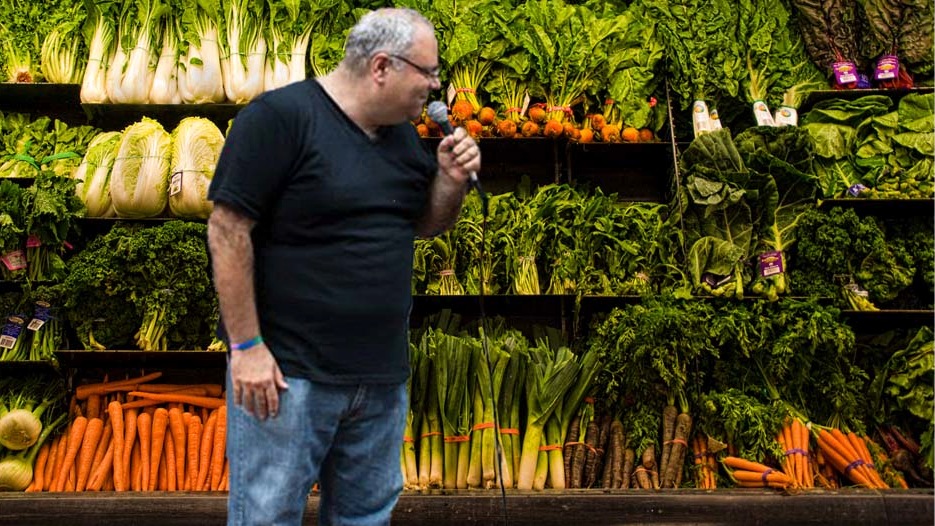 Following the successful introduction of beer taps and bar seating in its flagship Market District stores, Giant Eagle has announced that it is expanding the program to include full comedy clubs at all stores where alcoholic beverages are available for onsite consumption.

It all began at the Settlers Ridge location in Robinson Township. A customer was enjoying a draught IPA when the sports game he was following came to an end. Since his glass was still almost full, and he was sitting in a grocery store, he quickly became bored, so he asked cashier/bartender Shaun Parker to entertain him. Shaun, who fancied himself as a bit of a performer, was up for the challenge.

“I tried some flair bartending moves à la Tom Cruise in the classic movie ‘Cocktail’, but he said ‘You’re shit.’ So I said ‘No, you’re shit’ and started riffing on his terrible appearance and offensive body odor. He loved it! Soon other shoppers gathered to see what was happening and I managed to pull off some killer crowd work.”

Unfortunately Shaun had to be let go following a poorly judged takedown of a senior citizen who had come in for a head of broccoli. But an idea had been born.

Regional manager Janelle Cassavetes knew it could be a huge success, but only if it was done properly, using experienced comedians in a suitable environment. Her plan calls for expanded seating areas with velvet upholstery and votive candles in all stores with in-house beer sales. Those shopping at regular stores won’t find a comedy club, but, so they won’t feel completely left out, she’s arranging to have an ‘Open Mic’ near the cash register lines, where shoppers can hone their stand-up technique.

When asked if the comedians in the Market District stores will be toning it down to conform to some bland corporate standard, she is adamant that the comedy will be cutting edge.

“We believe the comics are the best judge of what material is suitable.”

Having said that, there will be a few limitations, given the unusual nature of the venue. Making fun of overweight customers is banned, as are jokes about the quality of perishable foods items on special. Blue humor will be allowed since children have no business being in the beer section in the first place, though comedians who choose to roam the aisles will be asked to use discretion. Making fun of Giant Eagle’s competitors will be not only be permitted, but encouraged.

“Be prepared for some no-holds-barred routines demolishing those ALDI jackasses.”

But this ambitious food retail executive sees even greater things in the future. She points to the recent series of popular Garth Brooks concerts, which she says Giant Eagle could easily handle given the ample parking spaces and indoor square footage at its disposal.

“I’m sure the PPG Arena does a good job with the basics of stage management. But do they also provide a full-service meat counter so you could buy some thin-sliced honey ham without having to make another stop on the way home? I believe the answer to that particular question is no.”

Obviously concerts with marquee headliners can’t be completely free, and there would be an admittance charge during the times those were happening, though she emphasizes that regular customers could partially offset those costs with the existing loyalty card program.

“Customers will be able to look at their receipt and see that they could get 30 cents off a gallon of gas at GetGo, or a 50% discount on an upcoming Cirque Du Soleil show above the frozen food aisles.”

It sounds like a winning proposition, though Janelle regrets they weren’t far enough along with the planning to host one of Garth’s appearances this time around. When asked if they would be competing with Heinz Field to host Kenny Chesney this summer, her answer couldn’t be clearer.

“Are you insane?  The entire store would be destroyed.”

For now it seems that shoppers will have to be content with top quality comedy when they venture out to get their frozen vegetables and skinless chicken breasts. But the future for supermarket-based entertainment in Pittsburgh has never looked brighter.