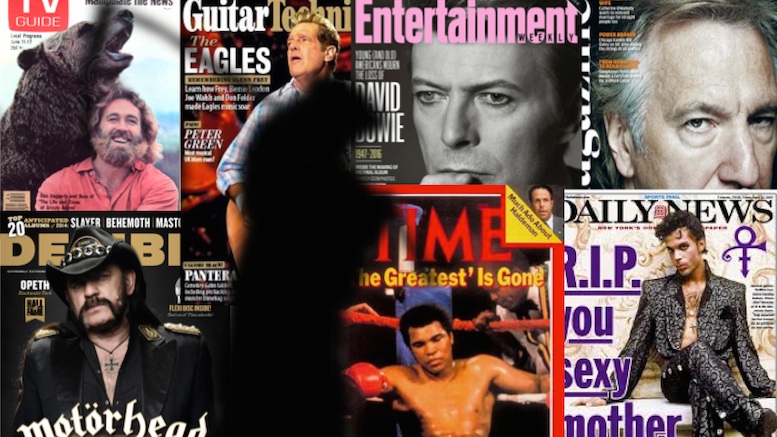 God has apologized for the behavior of the latest occupant of the office of Grim Reaper, who took over in early January when the previous holder of the position elected for early retirement.

“His references were impeccable and I never thought he would mess up like this, but he obviously has a fascination with celebrities as well as certain job-related insecurities that he tries to overcompensate for.”

Rather than quietly focus on the important work of shuffling millions of ordinary elderly people into the afterlife, the freshly-appointed reaper succumbed to the temptation to focus on those with high profiles in the arts and entertainment world.

“I had my concerns when he took David Bowie not even a week into the job, but then I thought I should give the guy a chance.”

God became increasingly worried as more and more hugely popular musicians and actors died as 2016 progressed. It appeared the newbie reaper was employed a system on focusing on a single aspect of human endeavor at a time – a definite no-no in the reaping business. Prince was the final straw.

“I told him yesterday the key to the job is to spread things around so it doesn’t look like your working one area too much. Why not focus on something else – like sports? Maybe take some lesser-known nonagenarians from the glory days of baseball. Next thing I know Muhammad Ali is standing next to me!”

God has dismissed the poorly-performing reaper and will take over the job until a suitable replacement is found.

“If there’s one thing you can’t afford to bring to this job it’s ego.”