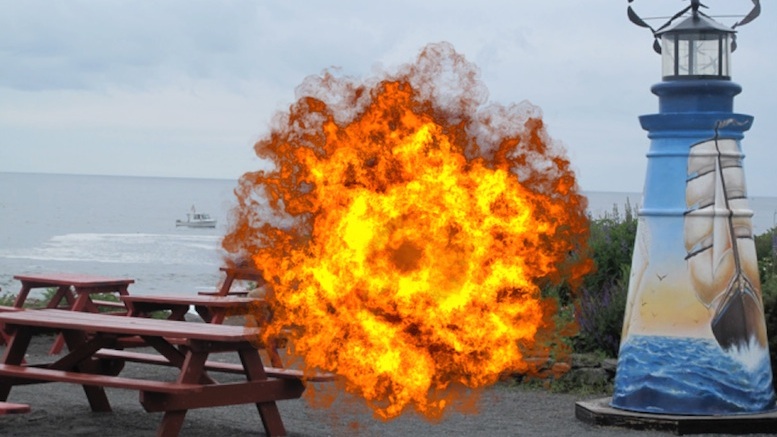 In a move demonstrating how serious the situation has become, God has taken the unusual step of appearing in person to deliver a direct message to humanity, something not seen since Moses and the burning bush, unless you count Jesus if you’re Christian. The supernatural event occurred at a small fishing town in Maine, where the deity appeared to locals at a lobster shack, reckoning them to be no-nonsense folk who would report their experience word for word without embellishment.

God began with an introduction and pleasantries and quickly got down to the key point, which is that God has had it with humans killing each other indiscriminately and assuming ‘God Will Sort Them Out’ afterwards.

“What if I don’t exist? Then you’ve ended the life of an innocent without any hope of them living on in the afterlife. It’s not as if I’ve ever given you concrete proof that I’m real – other than this apparition right now, of course.”

In case world leaders think God is only referring to stateless terrorist actors, God is also fed up with so-called ‘collateral damage’.

“You know, like when you use a massive missile to go after one person who just might be a threat to you and who happens to be hanging out in a crowded shopping mall. That kind of bullshit.”

God is especially pissed about having to judge so many young victims who haven’t even reached adulthood, let alone lived out normal lifespans.

“I know how fond you are of referring to that as ‘collateral damage’ as well, but how about we just call it ‘killing children who may or may not be in a war zone’ from now on.”

“I’m fairly certain that I already issued some commandment or edict that said that was wrong. If I didn’t, my bad. But now you’ve been told – so stop it.”

God, being a pragmatist, does not expect fighting to disappear overnight, since there undoubtedly is evil in the world.

“If someone’s really bad then find a way to kill just them if you have to and I’ll take it from there. But enough with the lazy shortcuts!”

God is also fed up with humans arguing over whether God is a He or a She.

“I’m an eternal divine being that pervades the Universe. Did it ever occur to you that I might not have genitalia?”

When it was put to God that it’s as much a problem of language as anything, God’s frustration with God’s supposedly greatest creation only increased.

“You haven’t managed to come up with a widely-accepted gender-neutral pronoun yet? What the hell is wrong with you people?”