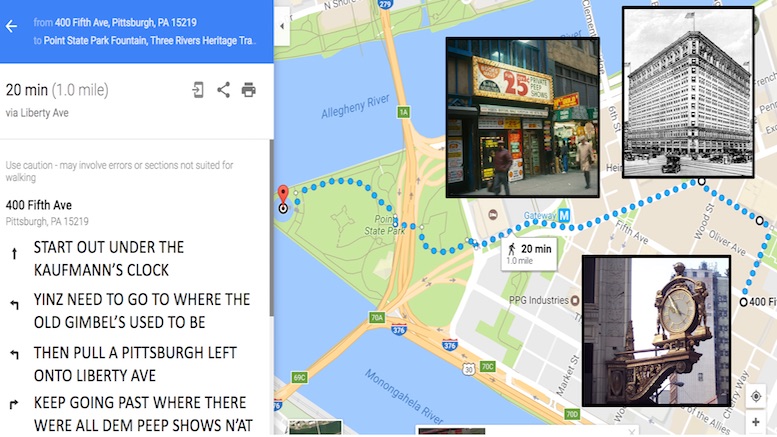 (Bakery Sq, Pittsburgh, PA) Google Maps have announced a complete revision of their algorithm for producing directions that will apply specifically to the Pittsburgh area. This is reportedly a direct result of feedback received through their campus in the East End of the city.

“We were getting complaints that our directions involved far too many current street names and precise distances, and not nearly enough references to obsolete George Aiken chicken restaurants.”

Those seeking to find their way around the downtown area will now instead receive instructions based on how near their destination is to the old Kaufmanns/Hornes/Bank-that-was-a-Lord-and-Taylors-for-a-while/Place-that-used-to-be-the-National-Record-Mart-but-is-now-something-else.

There will also be an option for navigating through the Sah-Sayd (South Side) using entirely bar-based directions if desired.

In all cases navigation devices will emit a loud piecing noise whenever any tunnel or bridge is being approached, in order to allow Pittsburghers to mentally prepare themselves in advance.