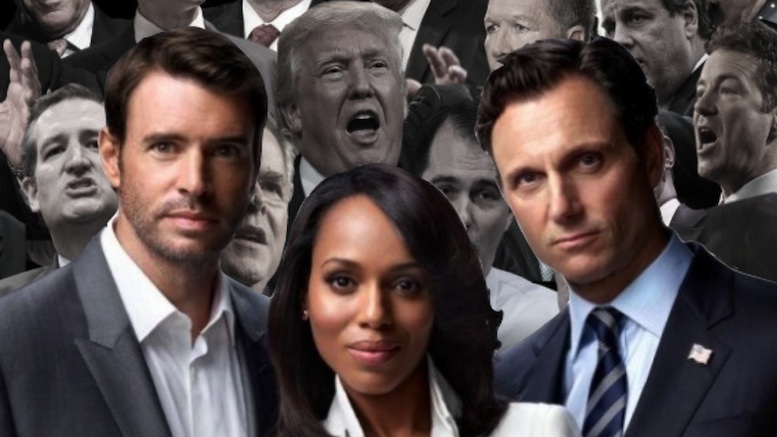 With Donald Trump still leading the field and none of the other Republican candidates seemingly able to dislodge him, the GOP establishment has made the decision to turn to the fictional Republican Party portrayed in ABC’s hugely popular political soap opera Scandal for help. They realize this may sound crazy but ask their supporters to give the idea a chance.

“This is an election season that sees an out-of-control Reality TV maniac heading the polls, so we believe our latest plan is sane by comparison.”

GOP donors are prepared to throw their support behind any of the actors who play Fitz, Mellie, Cyrus, or – in what would be their dream choice – Kerry Washington.

“Let’s face it – we wouldn’t even need to hold an election in that case. And Canada could no longer say their leader is prettier than ours.”

But they have no illusions about what it could mean to let the vivid imagination of show creator Shonda Rhimes find tangible expression in the corridors of Washington.

“If letting a real-life Papa Pope establish a Deep State that controls all aspects of our lives is the price we have to pay to avoid the possibility that Donald Trump takes the White House, the answer is hell yes!”

Party Chairman Reince Priebus believes that any GOP candidates who object to being cast aside can be brought around by Guillermo Díaz, whom he assumes enjoys torturing people with power tools as much as his character Huck so clearly does on the series.

“I’d also like the guy who plays Jack Ballard to run the CIA or something. That would be freakin’ awesome.”