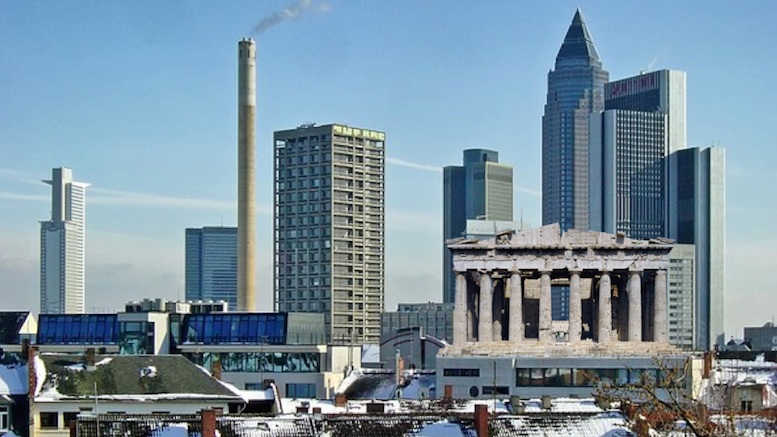 [Brussels, 13 July 2015, 9:24am CET] Greece has agreed a bailout with its creditors just as the country verged on complete collapse, but the deal was far from a foregone conclusion even well into the early hours of this morning. The size of the relief needed collateral, and as the marathon summit wore on it became clear that Greece would have to give up the only thing it had left of any value – its reputation as the cradle of western civilization.

Other countries that were known historically as barbaric backwaters eagerly embraced the opportunity to gain a better foundation story in exchange for offering favorable loan terms. Previously hardline Baltic States Lithuania and Latvia quickly dropped their objections when they were offered Aristotle and Homer, respectively, and from now on Archimedes will be known for having his Eureka moment in a Finnish sauna.

“So Greece will no longer be known for classical architecture or the works of Plato, but we can still take pride in more modern achievements such as—look, the banks will be open again and that’s what matters.”

The fine details were worked out by Greek finance minister Euclid Tsakalotos and his counterparts from the rest of the Eurozone. When one of them asked how he got his first name, Tsakalotos replied that he was named after the famous Greek mathematician, who is referred to as the ‘Father of Geometry’. The other ministers pointed out that, once the agreement came into effect, Euclid would be a Belgian, so it would make no sense for his parents to have named him that.

The forlorn Tsakalotos reluctantly agreed, and the deal was effectively sealed. But the drama (formerly Greek, now Slovakian) was not over yet as the deal was nearly derailed at the last minute when German hardliners attempted to also dump their country’s reputation as the perpetrator of the greatest evil in history on the hapless Greeks. France, and even pro-austerity states such as Belgium and the Netherlands, were having none of that.

“No fucking way – you’re keeping that chapter of history, Merkel”

In the end Germany dropped its demand to unload its Nazi past on Athens, and agreed to sign, though only on the non-negotiable condition that the Parthenon be relocated to Frankfurt. Euclid Yanni Tsakalotos encouraged his fellow Greeks to look on the bright side.

“We still have feta.”

Ironically, historians of antiquity believe that much of Classical Greece’s reputation as the founders of modern thought was actually acquired from the Babylonians in exchange for financial aid after they went massively in debt following a frenzy of temple building fueled by cheap money. The Babylonian economy abruptly collapsed when the stone bubble burst in 538 B.C., leaving them at the mercy of creditors.