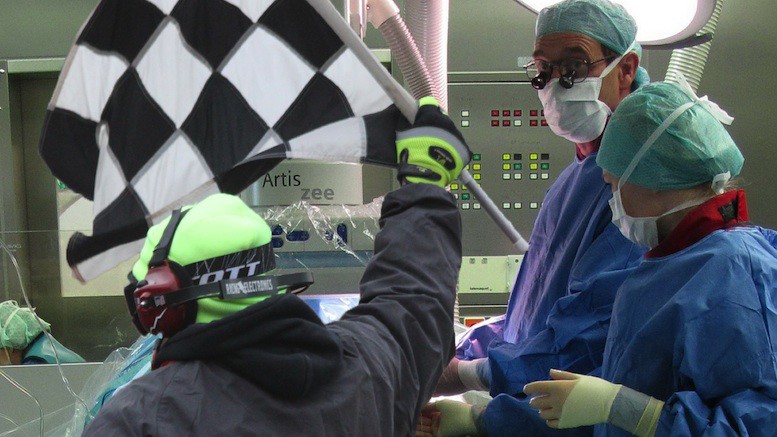 There’s been no love lost between UPMC and Highmark this past year, as each company claims the other is a selfish money-grubbing pile of hospital waste from the renal ward. Many believe both sides have a point. Though there appeared to be no common ground between the executives of the two healthcare insurance giants, a recent chance meeting on the golf course at Nemacolin proved otherwise. Forced into an awkward moment after being scheduled to tee off at the same time by mistake, they soon found they actually had a lot in common, such as a love of the same model of corporate jet. They also bonded over their shared experience of never needing to personally worry about having excellent health insurance for themselves or their families. By the ninth hole they had resolved to stop slinging mud at each other through the medium of woefully stilted TV advertisements, and agreed to decide who was the best with a one-day medical derby instead.

An independent auditor will be brought in to declare the winner, which will be determined by who saves the most lives that would otherwise be lost with a simple one-time intervention. If that doesn’t decide it, limbs and eyes saved will be the tiebreaker. Initial excitement about the proposed contest was dampened by worries that there wouldn’t be a sufficient pool of untreated patients. Lawyers for both sides insisted that the other network’s doctors and physicians assistants perform procedures on sick people who had not already been treated to avoid biasing the outcome. But they quickly realized it would not be a problem.

“It turns out the answer was right under our noses, or rather in our emergency rooms, where an ample population of uninsured people from all walks of life with potentially terminal conditions were being sent home with an aspirin and a prescription for prayer. It’s a good thing we’re doing this now, because in a few years Obamacare might destroy our ability to have fun corporate contests like this.”

A UPMC cardiothoracic surgeon paused during the selection of a 2015 Mercedes to replace his tawdry 2013 model to explain the tactics needed to prevail.

“Obviously there’s a delicate balance to maintain in order to win a contest like this. You want good outcomes but speed is equally important. Fortunately the UPMC bean counters have been pressuring us to increase throughput for some time now, so operating at dangerously breakneck speeds is almost second nature.”

Highmark were equally confident about how well their network doctors would perform in the upcoming challenge.

“We may not have the shiniest new technology in our hospitals like UPMC has, but in most cases it’s having any routine treatment at all that makes the difference. And on the day of the derby, we’re going to provide that treatment based purely on medical need. Wow – it feels strange just saying that!”

If you are one of the many sick Americans who are still uninsured and want to be a part of this exciting one-day event, they are still looking for entrants. There is a particular shortage of patients for the Radiation Oncology Gold Cup Stakes. The only requirement is to have a big tumor somewhere that a doctor would have been zapping already if you were lucky enough to have medical insurance, or live in Canada. Please note that follow-up rounds of radiation therapy will be charged at list price. If you need to ask how much that will be, you will almost certainly not be receiving follow-up rounds of radiation therapy.

Update: Don’t bother signing up if you have an operable brain tumor that will otherwise kill you, as the respective neurosurgery departments have agreed to decide who’s the best with a mini five-a-side soccer tournament instead.