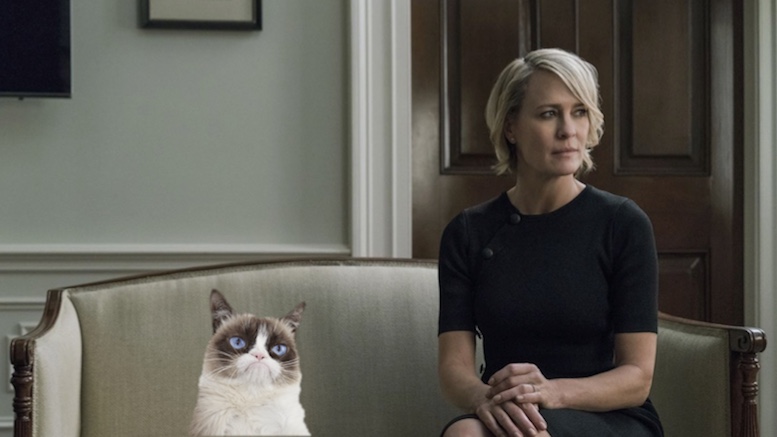 The writers of House Of Cards Season 6 say they have successfully reworked the remaining story arc after realizing the success of Twin Peaks: The Return demonstrated that audiences were prepared to accept far stranger plot developments that previously thought.

“Once that freed us up, we realized there was no need to kill off the Frank Underwood character – we could recast him with Grumpy Cat instead.”

Taking their inspiration from Franz Kafka’s nightmarish masterpiece Metamorphosis, the writers handled the transition with a single line in the script:

“INT. BEDROOM. MORNING. Frank Underwood wakes up to find he has turned into a cat – GRUMPY CAT.”

The benefits of replacing Kevin Spacey with one of the world’s most famous cats are many according to the show’s producers.

“Grumpy Cat has tremendous name recognition, is happy to work for treats, and hasn’t been accused of laying so much as a scratch on Anthony Rapp – if you’ll pardon the pun.”

That is not to say there is no baggage to contend with, such as Grumpy Cat’s penchant for licking himself in a certain region.

“Thankfully he tends to fiddle with his genitals in private, and, unlike Louis CK, if he does do it in front of someone he makes sure he has their full consent free of the corrupting effect of asymmetrical power dynamics.”

In the first episode with the new line-up, Robin Wright’s character learns to accept the cat for what it is, but still wonders whether this feline replacement does or does not plan to scheme against her. (Answer: He does.)