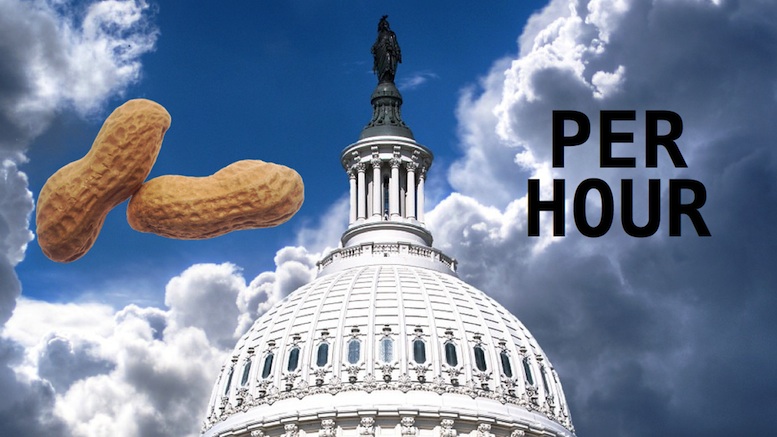 Still too high according to business leaders.

[Washington, DC] In an effort to combat local government attempts to raise the minimum wage to as much as $15 in some places, House Republicans have proposed a bill to lower the federally mandated minimum wage even further. When Democrats objected that the current value of $7.25 per hour was basically peanuts, the Tea Party caucus said that couldn’t be further from the truth, but it was a great idea. They immediately pressured novice Speaker Paul Ryan into passing a bill that lowers the federal minimum wage to two peanuts (shelled) per hour.

House Minority Leader Nancy Pelosi tried in vain to argue that more than two peanuts, or maybe some brazil nuts, would be better but the intransigent Republicans said people who wanted to earn two brazil nuts per hour should take out a loan and get some more education so that they can get a job that pays higher than minimum wage. They also pointed out that many business leaders believe that two peanuts is still too high, as the second peanut should be reserved as an incentive for employees who demonstrate extreme dedication to their work.

Walmart and other low paying companies are making provisional plans to transition to a peanut-based payment system in the hope that the legislation will make it through the Senate. Critics have suggested that two peanuts per hour corresponds to far fewer calories than an average adult needs to survive, so millions of workers earning the new minimum wage will need to be supplemented with welfare peanuts. This, they say, would constitute an effective peanut subsidy being extended to private corporations, on top of all the subsidies they receive already.