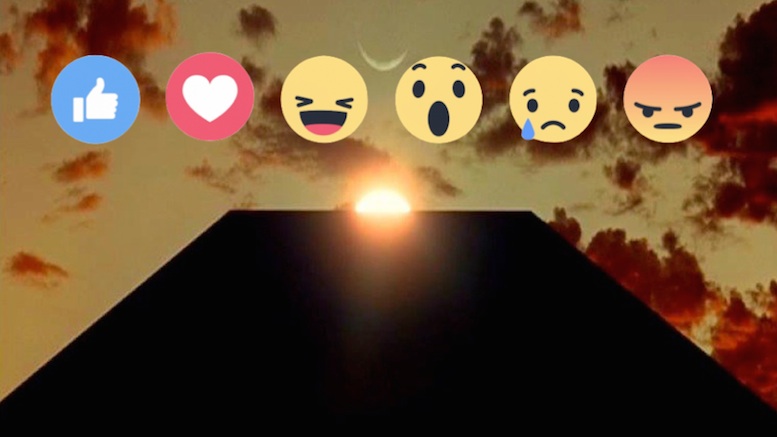 February 24, 2016, is a date that will be remembered for millennia for an epochal event presaged by Stanley Kubrick’s SciFi masterpiece, 2001 A Space Odyssey. For it is the moment that humankind made a giant and abrupt leap forward in intra-species communication.

Cultural anthropologists say it will take generations to fully comprehend the implications of this monumental happening, but did their best to sum it up to the extent mere language could even encapsulate it.

“Basically you now have 6 ways of ambiguously expressing yourself with little to no effort on Facebook instead of just one.”

Whereas in the dark days of February 23rd and before, Homo sapiens could only ‘Like’ a facebook post or abstain from liking a post, they can now choose from ‘Like’, ‘Love’, ‘Haha’, ‘Wow’, ‘Sad’ and ‘Angry’ buttons. But the tantalizing ambiguity that characterized the ‘Like’ button still remains, according to those who have studied the phenomenon.

“For example, if someone posts that they lost their job, a ‘HaHa’ reaction could mean ‘Ha Ha – I know exactly how that feels – my sympathies, brother’ or ‘Ha Ha that’s hilarious because I hate your fucking guts, brother’. Truly this is a day to celebrate the human race.”

Similarly, if someone shares an article that they think is interesting, the ‘Wow’ reaction could mean ‘Wow that is fascinating and eye-opening – thank you’ or ‘Wow, I can’t believe you’re so intellectually feeble you feel compelled to propagate this utter garbage’.

Perhaps the most interesting question is where we may go from here. However quickly we continue to evolve, Facebook says they already have a capability to accommodate any future quantum leap in our mental prowess – the comment fields.

“In principle they can be used to convey nuanced thought, much like people used to do face to face in the olden days. But so far they’ve only ever been used to call people Nazis.”