Dermot Caherty was enjoying a pint of the black stuff in his quiet local pub in Bellevue, PA, on St. Patrick’s Day when the place was instantly livened up by a troupe of young revelers exuding that wonderful mix of aggression and friendliness that only excessive alcohol or being borderline psychotic can provide. They were hugely excited to learn that a real Irishman was in their midst. Not wanting to appear unfriendly, the 56 year old Belfast native, who had only moved to the United States in his forties, attempted to field their inebriated questions about what life was like back in Ireland when he was their age. A young woman named Brianna was particularly fascinated, as she herself had an Oirishy sounding name.

“Did you get, like, totally wasted every St. Patrick’s Day? Like completely out of your mind, even more so than all the other days of the year?”

Dermot said he didn’t, but admitted to enjoying the odd pint or two on occasion. Brianna begged him to say ‘Top o’ the morning’ for their amusement. He happily complied, uttering the lyrical greeting for the first time in his life. She then insisted he regale them with stories about how much fun parades were back in Ireland. Dermot tried to explain that parades were a somewhat contentious issue where he came from, but the persistent former Tri-Delt was having none of it, given the high levels of alcohol coursing through her system.

“Don’t be a dick. Everyone loves parades.”

In an effort to placate her, he conceded that everyone does love a good parade, but drew the line at saying Leprechauns were real, or that Ireland was any more magical than anywhere else. Brianna insisted she had seen a news story in passing about people ‘disappearing’ there that led her to believe otherwise. Dermot politely suggested that that was not something he wished to talk about, but the normally-reserved twenty-five year old was in no mood not to press the issue today.

Now filled with a curious mixture of wishing to educate the young woman combined with a growing rage, Dermot decided to set her straight. He slowly and calmly explained that “The Disappeared” referred to the forced abduction of people who were murdered and buried in secret locations during the period euphemistically known as “The Troubles”, and that it still remains a hugely painful issue to this day. Brianna decided she had learned enough about Ireland, and returned to her friends.

When her friend Chad, who is potentially three-sixteenths Irish on his mother’s side, learned that she had located the genuine article, he resolved that he would make Dermot enter the spirit of the day. Chad, who is referred to by everyone that knows him as the life of the party, adopted the method that always worked for him – buying shots. Dermot was reluctant to join in, which Chad considered the height of bad manners, something this well-brought-up young man could not let pass.

“You’ll do a Belfast Car Bomb with me or I’ll fucking kill you, Grandpa.”

This unfortunately triggered some bad memories in the normally mild-mannered former Ardoyne resident and victim of multiple indiscriminate beatings at the hands of local paramilitaries and the RUC, and he proceeded to unleash a tirade of abuse at the young man. Chad reluctantly admitted defeat in his quest to make the Irishman join in their exuberant celebrations of the life of St. Patrick and everything the ‘Apostle of Ireland’ stood for and represented.

“Jeez, just have a Jägermeister instead if you’re going to be such a douche about it.”

Though the happy band of twenty-somethings felt momentarily subdued following their encounter with Dermot, they were soon back in the party mood after yet another round of green beer arrived. They concluded that he couldn’t possibly have come from the Emerald Isle after all, as he wasn’t even wearing a “Kiss Me – I’m Irish” hat or t-shirt. 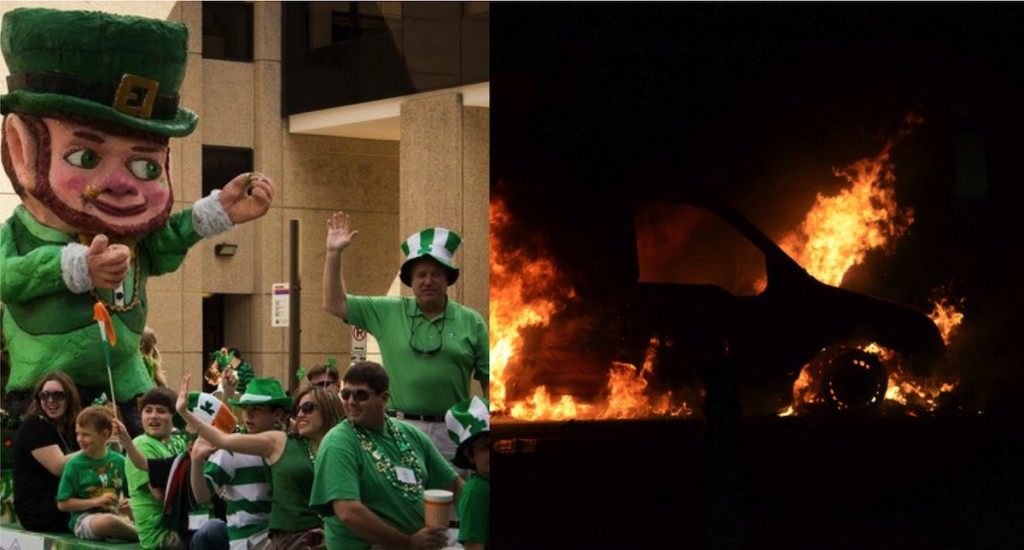 Be the first to comment on "Irishman Proves to be Total Downer on St. Patrick’s Day"