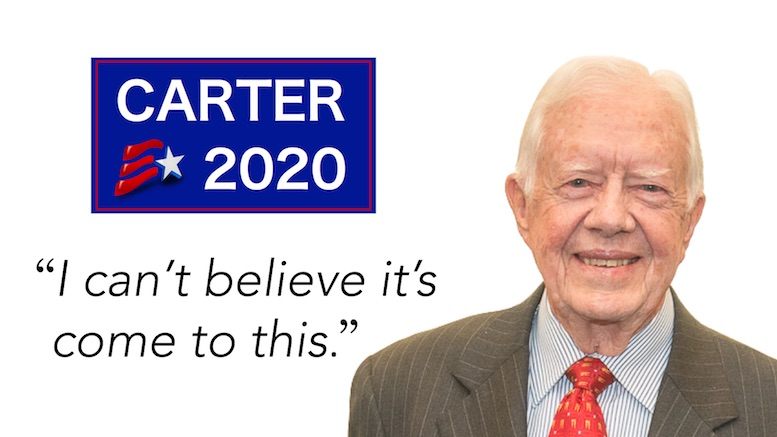 After heavy persuasion by supporters and colleagues, a reluctant Jimmy Carter has finally agreed to run in 2020 to put the country back on the right path.

First President in the late 1970s, Carter was seen as well-meaning but out of his depth. His stock has soared since then following his work in the international community.

Carter was dismayed at the rise of Donald Trump but hoped the Democratic Party would be capable of producing an acceptable alternative besides himself. Carter was appalled when Clinton lost in 2016, and is beside himself over the hold Russia has over the current administration.

“I’m not known for swearing, but in the Navy back in the 1950s we’d call this a clusterf**k. Forgive me, Rosalynn.”

Carter, despite being in his mid-nineties and have recently gone through successful chemotherapy, has finally accepted the fact that he’s the only politician with an ounce of sense left in the United States, making it his duty to run again.

“That Bernie Sanders has promise but all he can ever talk about is banks. But since he’s a youthful 78, I’m thinking of making him my VEEP so I can train him on the job to take over.”

Carter wants everyone to know that this is absolutely a one-off, even if he could run again in 2024.

“Then you’ll just have to learn to stand on your own two feet.”

Like Breaking Burgh? Don’t give us a handout because then we’ll immediately stop writing and magically turn into lazy good-for-nothing communists just like Mitch McConnell says. But you can help by buying our low-priced eBooks – they’re the best books!