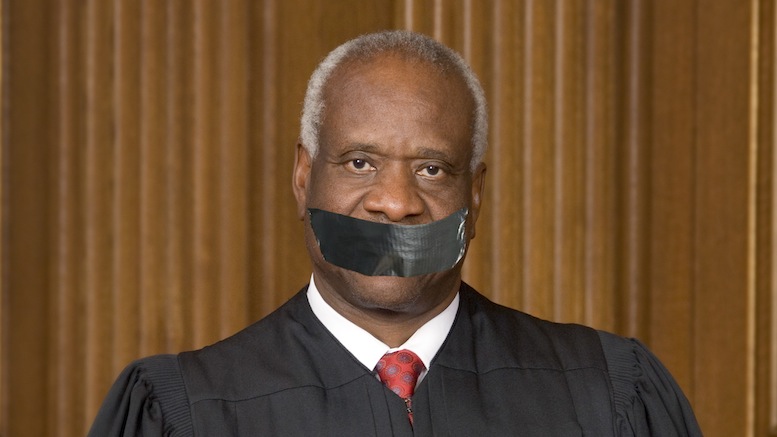 Supreme Court watchers were in shock recently after Justice Clarence Thomas asked a question from the bench for the first time in ten years. Unfortunately the Reagan appointee, having quickly developed a taste for rapid fire interrogation, is now reportedly severely addicted to the point that it is hampering the court’s business, according to Chief Justice John Roberts.

“We’ve had to gag him just to get anything done.”

Some have speculated the cause for his sudden questioning is the absence of alpha-Justice Antonin Scalia, who used to reserve the pleasures of savaging lawyer-prey with originalist theory all for himself. Regardless of the reasons for this disturbing development, the other justices had to stage an intervention after it became clear that Thomas had become hopelessly addicted to questioning. It’s not all that surprising according to Justice Sotomajor, given the intoxicating high jurists get from ripping the Solicitor General a new one with a well deployed barrage of incisive interrogation.

“It’s a potent rush – I have to limit myself for fear I’ll end up an addict too.”

Their efforts to make him see sense came to naught, and ultimately it took seven of their number to pin him done while Justice Kagen applied duct tape to stem the flow of questions gushing from Thomas’s lips.

“With our help, hopefully he’ll get through this in time.”