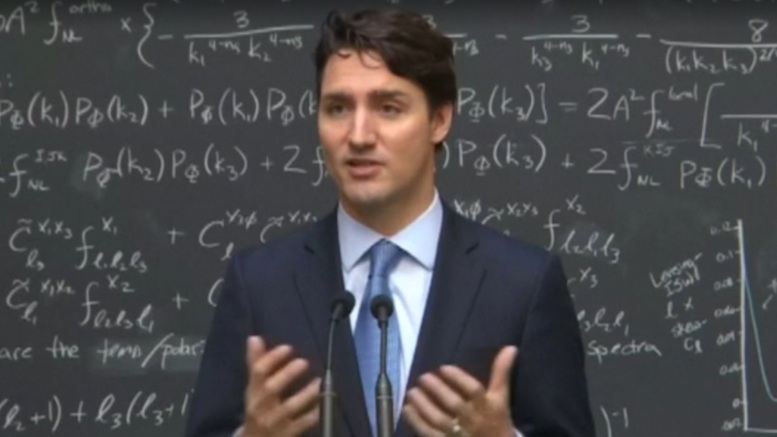 [Waterloo, ON] Always newsworthy Canadian Premier Justin Trudeau caused yet another media splash today when he spoke at the world famous Perimeter Institute for Theoretical Physics, which is receiving a $50 million budget to fund advances in quantum computing. In a blatant ‘gotcha’ attempt, one of the reporters present challenged Trudeau to explain how quantum computing actually works.

Far from flubbing it or passing to microphone to one of the scientists present, Trudeau gave an excellent description of the physics underlying the emerging science of quantum computation, proving that in addition to taking the time to be briefed on the subject, he had the grey matter required to grasp the fundamentals of one of the most difficult and counterintuitive scientific theories ever developed.

While members of the audience had braced themselves not to get too carried away at the sight of the most powerful man in Canada – who happens to have model looks and be an extremely nice guy on top of it – they were simply not prepared to handle the sexual ramifications of him also being capable of understanding the principle of superposition of quantum states.

“I was ready for him to fluff it, and enjoy a few ripples of pre-orgasmic quaking at his cute dumbness when it comes to physics and save the fireworks for later. But instead he delivers a perfect explanation of how the evolution of wave functions allows for highly efficient factoring of prime numbers, at which point I lost all control. Why didn’t I bring a spare set of panties?”

Nor was it limited to the straight women and gay men in the audience.

“I’m not nor have I ever been physically attracted to men though if I was I wouldn’t be ashamed to admit it. So I know I’m not gay. But I’m definitely Justin Trudeau gay as you can tell from the dark circular patch on my pants to the bottom left of my belt buckle.”

A reporter who arrived late tried to ascertain if Trudeau’s explanation of quantum mechanics had really gotten through to the audience, but said the only responses he could get were ‘I feel at one with the Universe’ and ‘mmmmm’.