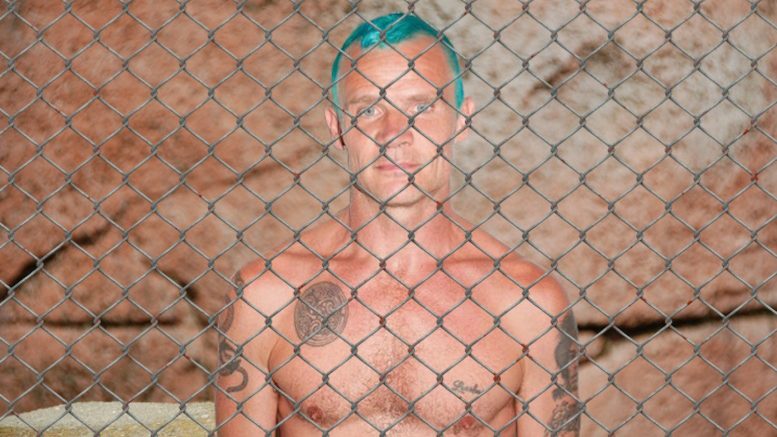 Flea enjoying some sun in his outdoor enclosure.

[San Francisco, CA] There was excitement – and not a little trepidation – at the San Francisco Zoo today as well known celebrity Koko the Gorilla stopped by for a meeting with one of the most popular exhibits – a primate named Flea of the genus Homo.

Though he appeared to respond to his visitor well, precautions were taken to protect Koko in case Flea became agitated, with zookeepers keeping rifles that fire non-lethal tranquilizers trained on the Red Hot Chili Peppers bassist. But this ultimately proved unnecessary, as the visit could not have gone smoother.

In a mild faux pas, Koko attempted to present Flea with a sweater because she thought the furless primate must get cold, but zoo officials explained that it’s not appropriate to make animals wear clothing when it’s not in their nature. On learning that Flea had never worn a shirt or sweater in his life, Koko completely understood and apologized for her thoughtlessness.

Koko, who communicates using an extensive vocabulary of hand signs, says she was very impressed with the intelligence that Flea displayed, and was even able to coax some rudimentary conversation out of her new smooth-skinned friend.

She added afterwards that she thoroughly enjoyed her time at the zoo and plans to visit Flea in his cage again as soon as her busy schedule permits.