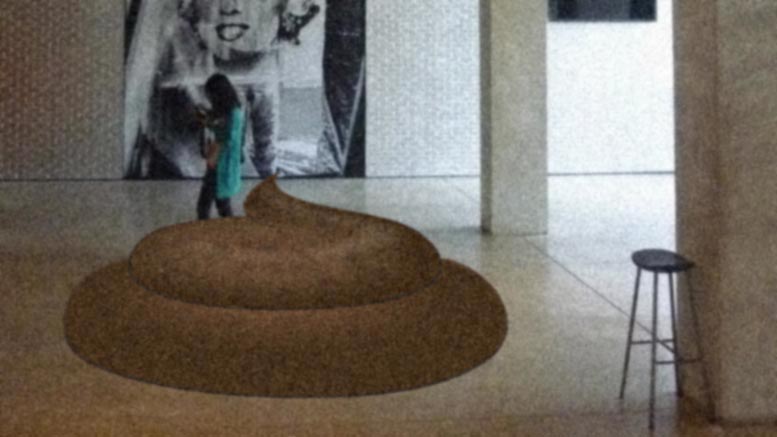 The Warhol Museum on Pittsburgh’s Northside has long been a destination for those seeking excellent examples of challenging contemporary art, and the latest guest exhibit is no exception according to the head curator.

Local avant-garde artist @johnjudeBFG says he was inspired to create the work whilst in the act of defecation.

“I remember suddenly thinking: this is us – this is what we do.”

Art critics have already hailed the sculpture for its bold Joycean statement on the vulgar reality of human existence. The artist is best known for his social-media-driven collaborative works, but says this was most definitely a solo project.

“I bagged my turds for over two years and froze them in preparation. Obviously there were some hurdles to get through as the display clearly violates a number of health and safety ordinances.”

He says the shape of his sculpture is not meant to represent anything specific other than a giant novelty turd, with the added novelty that it is actually made out of turds. But he was adamant about how big it should be.

“I wanted there to be a lot more shit by weight than there was of me, because that makes a statement.”

The room is kept at a cool 62 degrees to discourage flies that would otherwise accumulate in large numbers, and large updraft fans have been installed to aid art lovers in their appreciation. Museum staff maintain a constant vigil to ensure nobody tries to touch the work.

“Unlike our silver pillows room, this exhibit is not interactive. Believe me – some people have to be told, even though it’s clearly marked that it’s a pile of shit.”

To those cynics who say anyone could capture their poops and dump them on the floor of a trendy museum, art aficionados have a simple response.

“You could have but you didn’t, did you?”