It was a world one gay man never thought he would live to see – a United States that has become so tolerant that it now largely confines it’s homophobia to the provision of cakes and other goods and services. Whereas many of his fellow activists are frustrated that this kind of crap still goes on, Larry Stakes only sees positives.

“Whereas just a few decades ago someone like me was considered mentally ill by the American Psychiatric Association and shunned by much of society, now I’m welcomed as a human being who deserves as much respect as everyone else, with the minor exception that I do not always get to order pizza or have the wedding cake I want, assuming I reside in a state where I can actually get married.”

Though younger activists struggle to understand his thinking, Larry, being a gay man in his fifties, remembers the AIDS crisis of the 1980s when the plight of many of his friends was ignored at all levels of society and government. But Larry’s eternal faith in the fundamental goodness of people was vindicated in the end.

“They soon realized it can affect everyone and really got cracking, God bless ’em.”

It was that experience that led him to have a more positive reaction than most to the hostile Defense of Marriage Act and rash of related resolutions passed during the 1990s and early 2000s.

“You know what they say – there’s nothing worse than being ignored.”

While some are angry about the current passage of Indiana’s so called ‘religious freedom’ law, Larry has a different perspective.

“Let’s not forget that only recently the Midwest was beating gay people to death, so the fact that Indiana is now merely passing laws to deny us pizza is actually great progress.”

Larry has even befriended an elderly neighbor in need, Mary, despite that fact that she adamantly opposes his right to marry. According to Larry, when asked why she’s so opposed to two people of the same sex who are deeply in love wanting to express that by committing to each other in matrimony, her answer is revealing.

“Marriage isn’t about two people who love each other entering a committed union, silly – it’s about a woman pledging to unquestioningly serve and obey her husband and master in glorious bondage to Almighty God.”

Larry believes we should feel sorry for someone like Mary who has spent her whole life weighed down by such a perverted outlook. But his younger friend Jim is less forgiving as he believes people should be held responsible for how their actions and beliefs affect the lives of others, regardless of how much they might be suffering inside. He is polite to Mary though, out of respect for Larry, even when she makes disparaging comments that suggest she assumes they are a sexually active couple. In fact they are just good friends, but Jim likes to joke about this frequent misunderstanding.

“I guess straight men and women who know each other always hump!”

Jim describes his friend Larry as being pathologically determined to always find the silver lining, but even Jim is able to adopt some of Larry’s infectious optimism when he learns that homophobia is more prevalent amongst the elderly.

“There’s this great thing about old people – they die!”

One thing they both agree on is that, despite it all, they still love America – land of the free, unless you’re gay and want a danish. 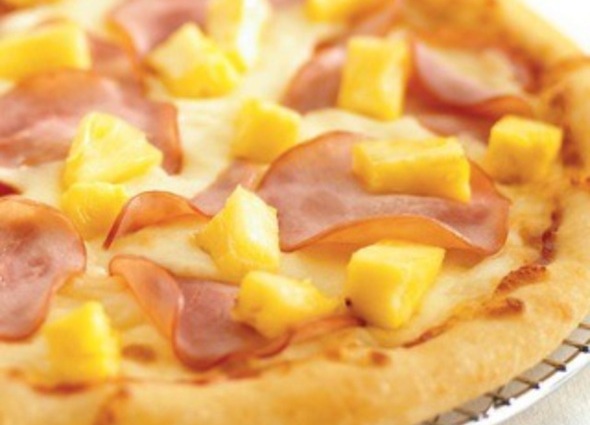 Make mine a pork and fruit pizza!