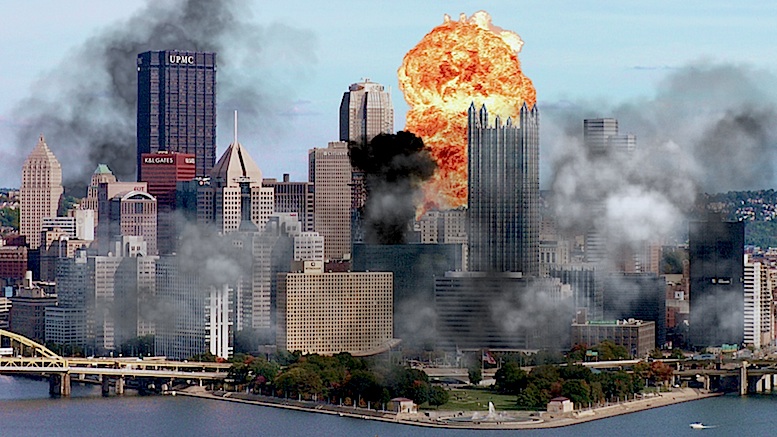 There was a bumpy start to the holiday weekend in Pittsburgh as commuters were treated to apocalyptic scenes of the Liberty Bridge on fire. The cause of the frightening plumes of dense black smoke has not been determined yet, but City authorities have narrowed it down to two possibilities.

“Either a tarp caught fire accidentally or Cleveland has pulled a Pearl Harbor on us.”

Though the burning tarp theory seems more likely, longtime residents of Pittsburgh say the possibility of a sneak attack by the so-called Mistake-On-The-Lake should not be dismissed out of hand, given the animosity between the two cities over the years.

“I wouldn’t put it past them to aim a SCUD missile at downtown and hope they hit something important.”

A quick review of city infrastructure raised fears that a great many more targets had been hit, until it was realized that the damage was longstanding.

“We were certain the Smithfield Street Bridge had been hit too as there were huge craters in the tarmac and entire structural elements missing. But it turns out that was just unaddressed wear and tear.”

On the principle that the best defense is a good offence, Major Peduto has decided to proceed on the basis that it is a premeditated attack until proven otherwise.

“I have already dispatched a team of saboteurs to Cleveland to bring down their power grid and communications – and another team to Baltimore, just in case.”